Global mobilization against blockade on Cuba recognized in Europe 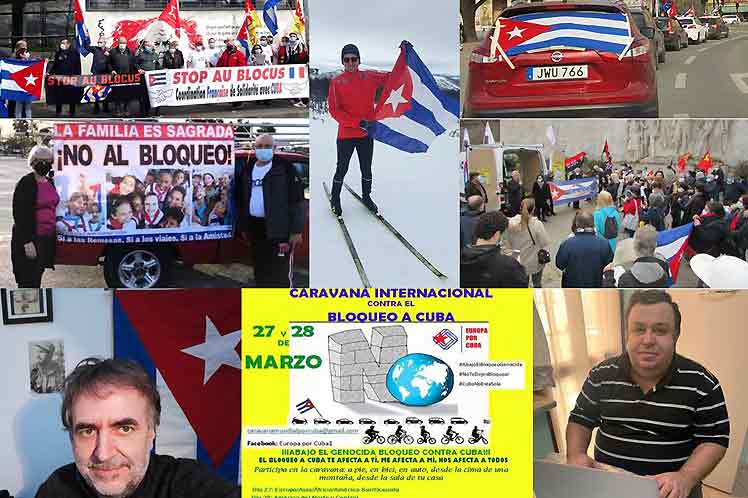 Global mobilization against blockade on Cuba recognized in Europe

We must acknowledge the participation of organizations and individuals in the five continents and their condemnation to a criminal and genocidal economic, commercial and financial blockade, in a weekend of mobilizations that exceeded all expectations, Jose Antonio Toledo and Michele Mesagna, coordinators of the channel, told Prensa Latina.

The platform of solidarity with Cuba, which has been broadcasting programs on its YouTube profile for six months, convened by late February to demand the lifting of the siege in force for more than 60 years, a call to which citizens and Cuban residents in Africa, America, Asia, Europe and Oceania joined, with great impact on social media.

According to the activists, caravans of cars, bicycles, marches, rallies, mountain climbing and protests in front of US Embassies and banks that add to their extraterritorial pressures marked mobilizations perhaps unprecedented due to their scope and diversity.

Neither the Covid-19 restrictions, nor the inclemency of the weather prevented many people from expressing their rejection to the blockade and their solidarity with Cuba, to the point that it is difficult to know how many countries took action, given the large number of individual initiatives, they told Prensa Latina.

The Europe for Cuba channel registered activities in at least 77 nations, confirmed as of photos and videos of the participants, but its moderators stated that there is information about others.

The weekend was a starting point, more world activities will come to demand that the genocidal siege ends, Europe for Cuba is already working on that with several organizations, they said.