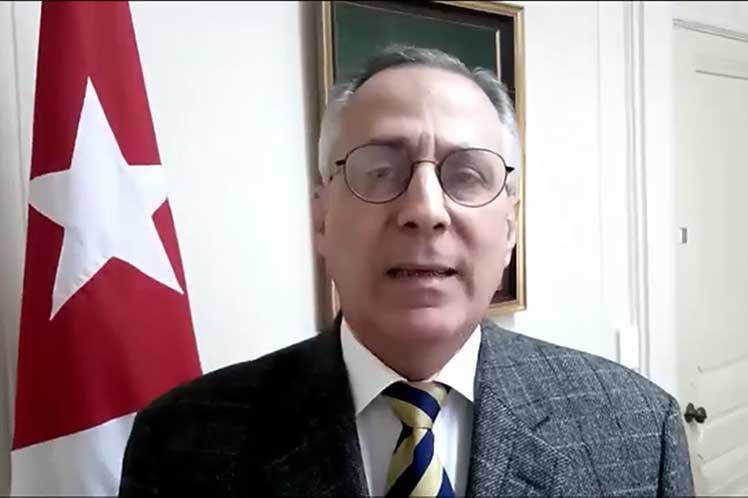 The head of Cuba’s diplomatic mission issued a message that he sent to the Infobae media with his response to Almagro.

‘One can be an ideological adversary but not a faker. If the Cuban Revolution were not deeply libertarian and democratic, it would not be in power, nor would Cubans have resisted over 60 years of blockades and aggressions, nor practiced solidarity with the world that supports us,’ Prada noted.

The diplomat sent his response to the directors of the Argentine news website, which issued Almagro’s statements during a virtual forum in which he accused Cuba of committing ‘State terrorism against those who think differently.’

In the letter sent to Infobae’s director, Valeria Cavallo, Prada points out that he cannot but respond to the OAS secretary general’s statements, which not only defame and deeply offend Cubans, but also reveal his absolute complicity with US policy and encourage its corrupt and criminal practices.

‘Almagro knows perfectly well that the unilateral, illegal and spurious declaration of Cuba as a State sponsoring terrorism made by the Trump government before leaving the White House is false from top to bottom, and constitutes an electoral and political tool to justify its unpresentable policy with respect to my country,’ it refers.

At another point in the letter he sent to Infobae and was not published, Prada underscored how the secretary general of the Organization of American States lies and offends by speaking of acts of terror in Cuba.

‘The known ones are those financed by the US government, channeled through NGOs, so that groups in Miami hire through social networks people in Cuba at rates ranging from a phone recharge to hundreds or thousands of dollars for sabotaging patrimony and murdering,’ the diplomat noted.