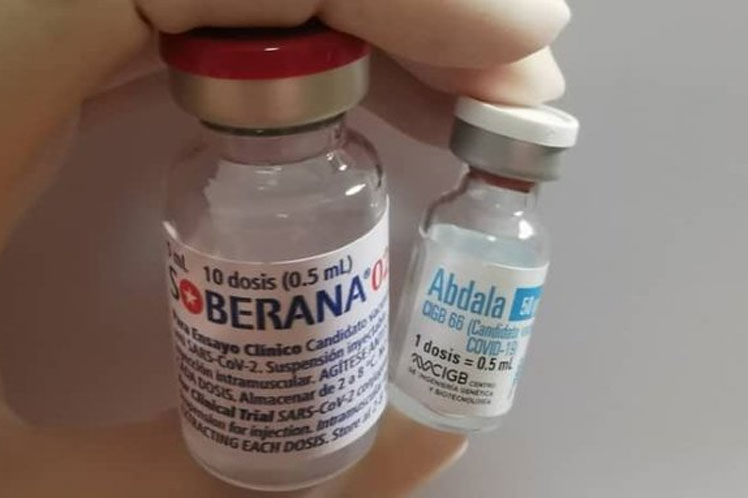 The two vaccines are part of a list of 24 subunit vaccines that are being developed globally, also included in the group of 16 that are currently making progress in the third phase of their trials.

The main objective of this period is to assess the efficacy, safety and immunogenicity of the vaccination to fight SARS-CoV-2, which causes the disease, and this phase is characterized for being multicenter, adaptive, parallel-group, randomized, placebo-controlled and double-blind.

Soberana 02, developed by the Finlay Vaccines Institute (IFV), was the first formulation to begin the study on March 8 in Havana with 44,010 volunteers aged 19 to 80 years.

Its immunization schedule is zero, 28 and 56 days and just a few days ago, its developers announced that all the subjects included in the research had received the first dose.

Meanwhile Abdala (CIGB-66), developed by the Center for Genetic Engineering and Biotechnology, Cuba’s second proposal against Covid-19 in reaching this stage, started the administration of the first dose on March 22. Designed with a short schedule of vaccinations, of only four weeks (zero-14-28 days), this cycle culminated in 10 days in 48,000 volunteers from Santiago de Cuba, Guantanamo and Granma provinces, with a high incidence of the disease in the last times.

Soberana 02 and Abdala (CIGB-66) are now joining forces in the administration of the second dose to more than 92,000 subjects participating in these two trials.

April will be decisive to begin trials with another of the vaccine candidates for the pediatric population aged five to 18 years.