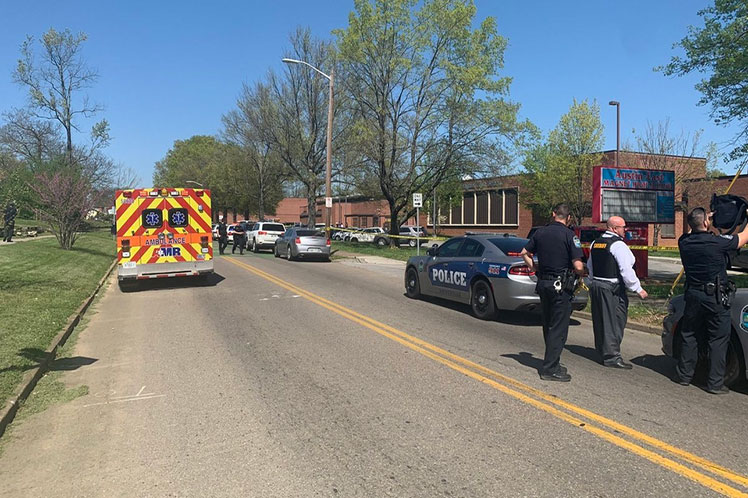 Although KPD at first reported several injuries, shortly after it said the student –who has not been identified- died at the school and a KPD officer was taken into surgery after being shot at least once in the upper leg.

‘Upon approach of the subject, shots were fired,’ KPD wrote on Facebook. ‘A KPD officer was struck at least one time and transported to the UT Medical Center with injuries that are not expected to be life-threatening.’

Police said one male was pronounced deceased at the scene, while another unidentified person was detained for further investigation. There are no other known gunshot victims.

The Tennessee Bureau of Investigation said earlier that agents have gone to the school. The bureau, which is the state’s top crime-fighting agency, didn’t elaborate but said it would provide more information later, Bob Thomas, superintendent of Knox County Schools, tweeted.

Bob Thomas, superintendent of Knox County Schools, tweeted later Monday that a shooting had occurred but the building had been secured and students who were not involved have been released to their families.

According to The New York Times, gunshot murders increased by 25% in 2020, which means that the United States exceeded 20,000 murders in just one year for the first time since 1995.

The Archive of Armed Violence, a non-profit organization, indicated that up to this Monday about 11,957 armed violent deaths occurred in the country, while 9,410 individuals were injured.

Last week, President Joe Biden issued executive orders aimed at cracking down on gun violence, calling this matter as an epidemic and disgrace.