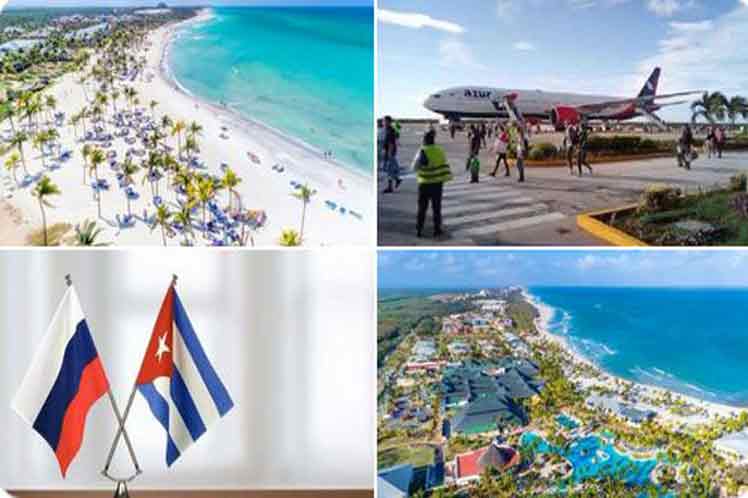 Russian tourists traveled by the Azur Air company in a Boeing 777 with 527 passengers on board to the Matanzas airport, second in importance on the island after José Martí at the capital, and located between this capital city and Varadero.

Yarisleidy Espinosa, head of the commercial department of the aforementioned aerodrome, told Prensa Latina this restart of operations with a market that moves a large number of vacationers to the main Cuban sun and beach area is of tremendous importance for the country.

‘It is a way of announcing that Cuba is ready for the world, with all the required biosecurity measures, in this effort to resume tourism activity.’

Yamil Millares, head of ground operations, for his part, pointed out that starting this Sunday Azur Air will also have itineraries Tuesday and Thursday, while on April 24 NordWind will join (Wednesday and Saturday) and two days later Royal Flight Monday and Thursday.

‘This programming is scheduled until October, while the companies TUI and Cóndor will return the coming month of May, while Russian Aeroflot must start trips soon,’ he said.

According to statistics, through this airport, with 31 years of service, just over 30 percent of visitors arrive in Cuba and most of the vacationers who choose Varadero, one of the best beaches in the world, for their vacations.

Varadero has superior standards of comfort and health security, is located on the Hicacos peninsula on the north coast of Matanzas, and about 140 kilometers east of Havana.

It has 52 hotels that have over 22 thousand rooms dedicated to the so-called smoke-free industry, and it has a varied non-hotel network with extensive recreational options, especially nautical ones, cafes, restaurants and nightclubs.