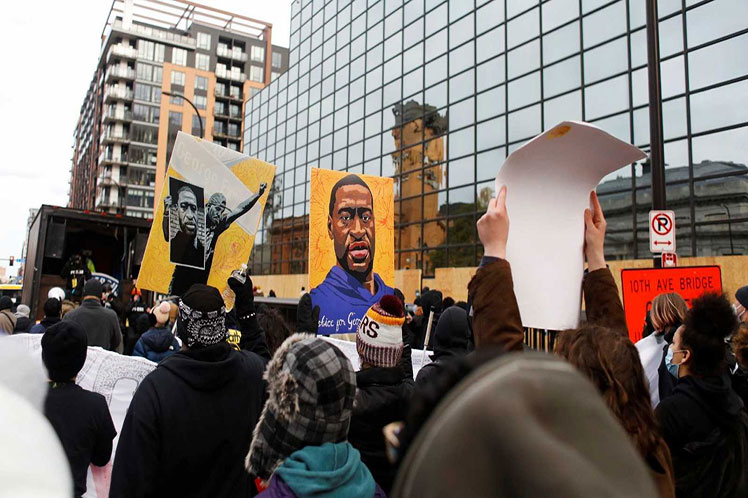 Washington, Apr 21 (Prensa Latina) Former Minneapolis Police Officer Derek Chauvin was convicted Tuesday of murder and manslaughter for pinning George Floyd to the pavement with his knee on the Black man´s neck in a case that touched off worldwide riots, violence and a furious reexamination of racism and policing in the US.
Share on facebook
Share on twitter
Share on whatsapp
Share on telegram
Share on email

The jury of six white people and six Black or multiracial ones came back with its verdict after about 10 hours of deliberations over two days. Chauvin was found guilty on all charges: second-degree unintentional murder, third-degree murder and second-degree manslaughter.

Local media said that he (Chauvin) could be sentenced to 40 years behind bars in a legal process that has been showing a high profile and live-televised.

Debates began after three weeks of testimony in which the Prosecutor’s Office presented 38 witnesses who tried to show that former Minneapolis police officer committed a murder on May 25, 2020, when he knelt on Floyd’s neck and back. Floyd was handcuffed and face down on the street, while Chauvin knelt on his neck for 9 minutes and 29 seconds.

During the first trial sessions, in early April, a footage of Chauvin kneeling on top of Floyd was shown before the jury, who reiterated that he could not breathe.

This act of police brutality unleashed a wave of riots across the United States and strong questions about abusive police actions.

Hours before the ruling was issued, President Joe Biden said that he prayed for the verdict to be correct, and told reporters that he spoke with Floyd’s relatives by phone.