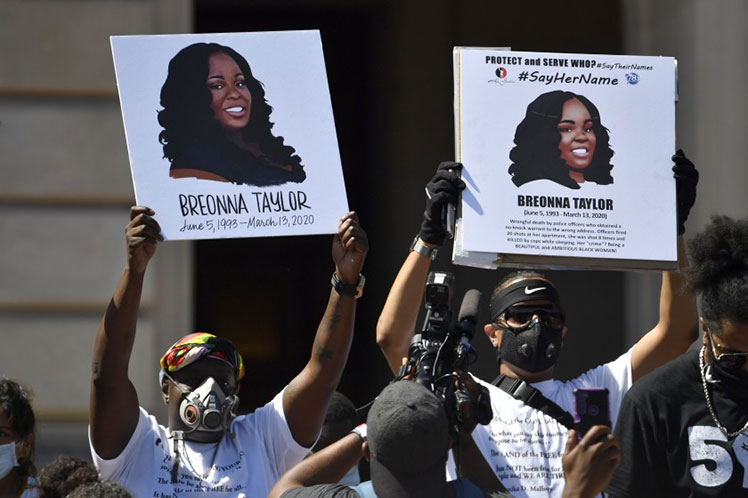 Washington, Apr 27 (Prensa Latina) Attorney General Merrick Garland on Monday announced that the Justice Department has opened a broad civil-rights investigation into the practices of the Louisville Metro Police Department in Kentucky, more than a year after the fatal shooting of Breonna Taylor in her home during a botched police raid.
Share on facebook
Share on twitter
Share on whatsapp
Share on telegram
Share on email

The inquiry will examine whether Louisville officers routinely violate citizens’ rights, including the illegal execution of search warrants on private homes, Mr. Garland said. It will also seek to determine whether officers use excessive force, discriminate based on race and engage in unconstitutional stops, arrests and seizures.

In addition, officials from the department’s civil-rights division and the local US attorney’s office will check possible discriminatory actions such as disproportionate arrests of black citizens, to review the police department’s policies and training and to examine whether officers are effectively held accountable.

Breonna Taylor, a 26-year-old emergency-medical technician in Kentucky’s largest city, was killed on March 13, 2020, as she was asleep with her boyfriend when the police, who had secured a no-knock warrant to search her home in connection with a drug case, forced entry into her apartment.

Ms. Taylor’s boyfriend, Kenneth Walker, thinking the officers were intruders, shot at them. Three Louisville officers responded by firing 32 bullets, at least six of which hit Ms. Taylor, one of them fatally, according to reports.

After the incident, Kentucky’s Black community leaders accused the police department and Kentucky’s attorney general, Republican Daniel Cameron, of trying to cover up the tragedy.

Mr. Garland on Wednesday said the department would examine whether Minneapolis police engage in excessive force and discriminatory practices, a day after a state jury convicted Derek Chauvin in the murder of George Floyd, whose killing, following Ms. Taylor’s, led to nationwide protests over policing and racial injustice.