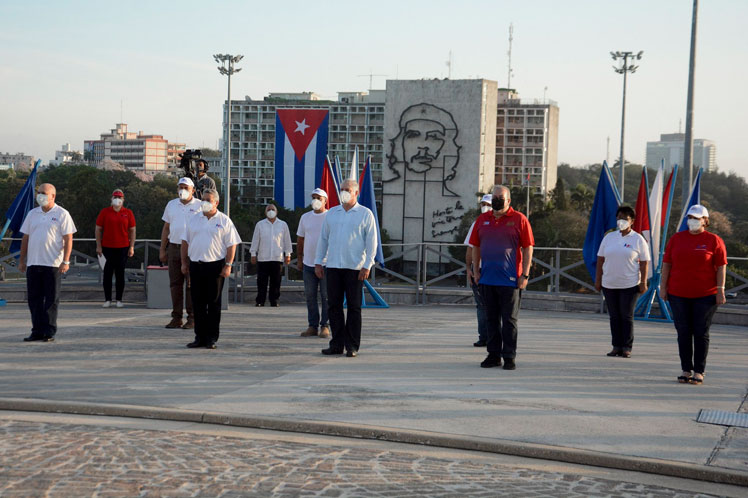 Prime Minister Manuel Marrero and the Secretary General of the Central de Trabajadores de Cuba (CTC), Ulises Guilarte, accompanied the first secretary of the Communist Party of this country in placing a wreath before the statue of Martí in the Palace of the Revolution (seat of the Executive).

At the event, the head of the CTC highlighted the prominence and patriotic commitment of the nation’s working class, immersed in the battle to resist the blockade and the aggressions of the United States in the midst of the battle against the Covid pandemic. 19.

We are aware of the demanding and challenging scenario but also of the conception of the historic leader of the Revolution, Fidel Castro, that only those who fight have the right to triumph, Guilarte pointed out.

Due to the health measures implemented to combat the Covid-19 pandemic, this May 1 is celebrated mainly on social networks, where Internet users post messages, images and videos to express their support for the Revolution.

Among the fundamental demands of the workers are the demand for the lifting of the economic, commercial and financial blockade imposed by the United States on Cuba for more than six decades, and the denunciation of its resurgence as of 2017, after the arrival of Donald Trump. to the White House.

As part of the festivities, an International Meeting of Solidarity with the Caribbean nation is also held, in which more than 80 representatives of trade union, youth, women’s and political organizations from Europe, Asia, Africa, the Middle East and America participate.