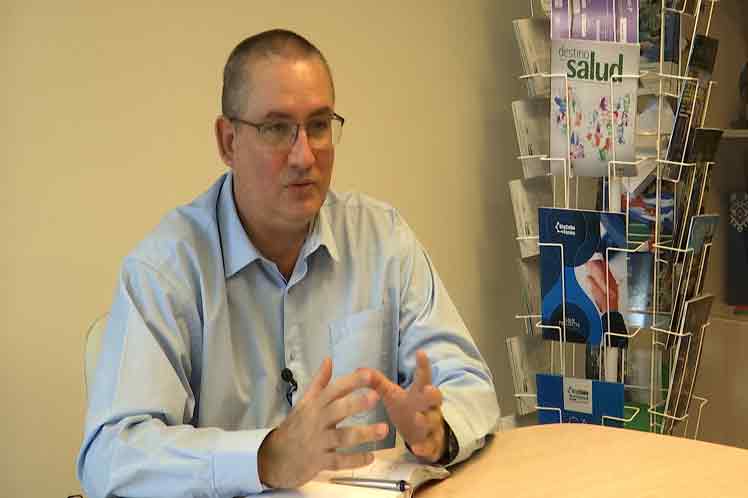 The executive told Prensa Latina that the Cuban party decided to establish alliances with Russian developers of this sector to achieve joint products, which could be registered and applied for the benefit of this country and other Eurasian nations.

We have a large portfolio of products and services, with drugs registered in several countries, such as Kazakhstan, Belarus, China and India, which have been very effective against neurological and infectious diseases, cancer and other pathologies, he noted.

He considered that, through these alliances with national institutions, Cuban enterprises will be able to benefit economically, but also have an impact on the population’s health, which is in line with the Russian government’s policies and challenges in this field.

He said that Russia has among its priorities to increase life expectancy to over 80 years by 2024, and children’s health, the fight against cardiovascular diseases and cancer are among its key lines of work.

In this regard, he stressed that Cuba has good practices and a strong policy that supports and develops mother and child care, so ‘we have very interesting products and program proposals.’

He said that BioCubaFarma also has programs and products, both in the research and development phase, and registered ones, for the treatment of several types of cancer, which is one of the diseases with higher incidence and impact on Russia’s mortality.

The official pointed out that the Cuban biotechnological and pharmaceutical enterprises also focus on cardiovascular diseases, the first cause of death both in Cuba and Russia.

He commented that there are Russian enterprises interested in Policosanol, known as PPG, due to its impact on diseases related to hypercholesterolemia and cardiovascular ones, but it has also shown good results in the recovery of patients with ischemic stroke.

Castillo called the attention of possible Russian clients for the CimaVax-EFG vaccine and Nimotuzumab, approved for some types of cancer that do not have effective treatments, especially in the lung, pancreas and brain, he clarified.

He added that project CIGB 845, under research with patients recovered from cerebral ischemia, appears on the list; and the Neuroepo drug, with studies in phases II and III to treat ataxia and Alzheimer patients.

He announced that they signed memoranda of understanding with the Research Center ‘Fundamentals of Biotechnology,’ the Mechnikov Research Institute of Infectious Diseases, the Shemiakin-Ovchinnikov Institute of Bioorganic Chemistry, all from the Academy of Sciences of Russia.

The representative of the Cuban firm said that two new enterprises were created in the Skolkovo Technology Park, one of the biggest in Europe, based on joint projects.

One of these enterprises is Neyros, devoted to the development of an innovative product for the treatment of Parkinson, based on agreements with BCF.SA enterprise and the Center for Research and Development of Medicines (CIDEM), from BioCubaFarma.

The other enterprise created is Alphanil, focused on researches on new cancer immunotherapies, in which the Cuban counterparts are CIMAB S.A. and the Molecular Immunology Center (CIM).

The BioCubaFarma executive highlighted that these enterprises were created with Russian venture capital. ‘There was support from innovation centers that acknowledged the quality of these projects and, therefore, approved them and, on the other hand, from foundations and institutions that provided funding, betting on future achievements,’ he said.

Castillo said that another achievement was the inclusion of CIMAB S.A. and CIM in the Biorganica Consortium, a group made up of medical, academic institutions and enterprises, in which the Cuban party can present joint projects to be evaluated, developed and subsequently registered.

He highlighted that the dynamics of exchanges with the Ministry of Health also included talks about Cuban products for the treatment of Covid-19, with very good results in Cuban patients.