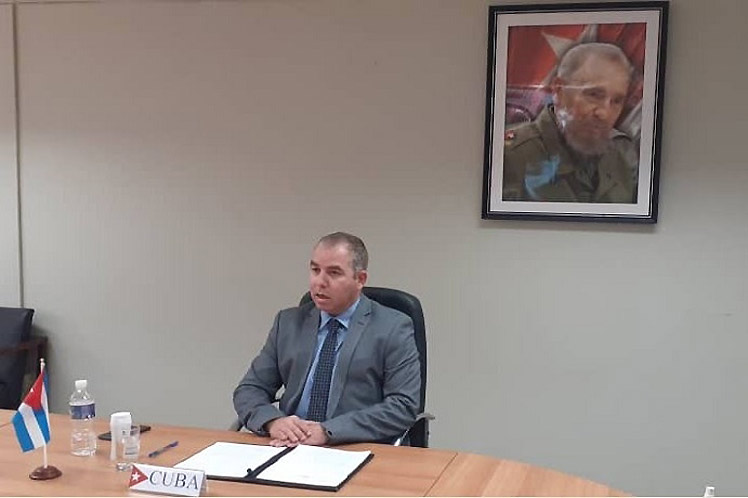 Such a figure, equivalent to US$83 million, was released during Regueiro´s speech at the 7th Meeting of Ministers of Finance and Economy of the Ibero-American Conference held virtually in Dominican Republic.

Vladimir Regueiro stressed that the hostile US stance, even amid the pandemic, has not precluded Cuba from sinking over US$300 million into Coronavirus PCR tests and into molecular biology labs, and also from allocating resources to job protection.

In his speech, Regueiro restated that this unilateral policy (blockade) is the largest systematic violation of the human rights of the Cuban people and also the major drawback to their right to development.

Likewise, he weighed the biopharmaceutical industry level that has allowed the country to have five vaccine candidates, in separate phases of clinical trials, in order to immunize its whole population this year.

Plus, Regueiro went over again that fighting Covid-19 issue was the main debate at the 2020 Ibero-American Conference, thus proving how important cooperation and solidarity are for joint solutions to this global challenge.

As to economic matters, Vladimir Regueiro praised that in 2021 Cuba started off its Monetary and Economic Overhaul process, whose principles and norms grant higher dimensions to the country´s Economy and State Budget as instruments for social economic development.

In this regard, he said this transformation will keep the financing for social programs and basic services to population and it will also support business sector for continuing to implement productive programs in strategic sectors, with a greater effectiveness and efficiency of government outlay that will be reversed in greater revenues.

Cuba´s Deputy Finance and Prices Minister explained that accrued structural issues, added to the impacts of the pandemic and the US blockade, make it necessary to review the country´s future with active fiscal and monetary policies in favor of its people.

Vladimir Regueiro stated, to that end, the ‘public debt we accrue to save lives and safeguard the right to well-being and decent employment will never be greater than debt with humanity. That is what their peoples expect and Cuba will comply with this precept, condition intrinsic to its politics since the 1959 Revolution Triumph.’

Cuba will never give up building a sovereign, independent, socialist, democratic, prosperous and sustainable nation, for which it has an Economic and Social Strategy, a Development Program by 2030 as well as a Government goal-oriented to the human being´s welfare, he touted.