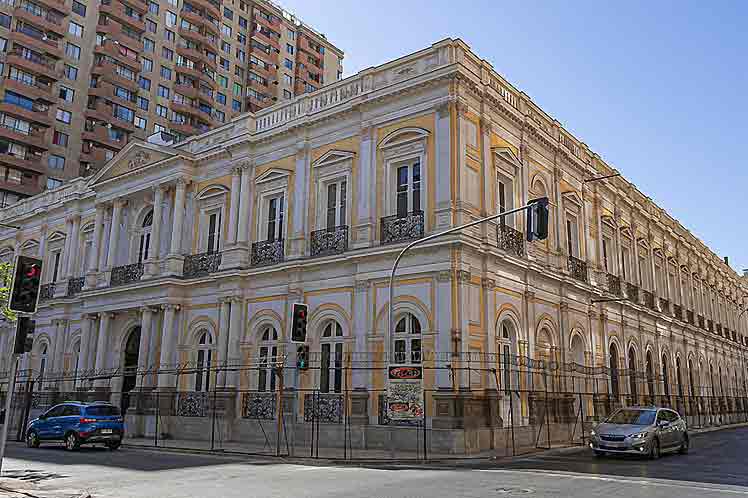 The 155 people who makes up this body in charge of drafting the country’s new Constitution were elected in the elections held last May 15 and 16, and will begin to meet next July.

As foreseen, the constituents will hold their plenary sessions in the chamber of the former National Congress, while the palace will house the commissions and voter offices and the services that will guarantee their work.

Built in 1872 by French Lucien Henault, who arrived in Chile as a government architect, the building was the sumptuous residence of the Luis Pereira Cotapos family, a politician and wealthy business executive.

Located at 1515 Huérfanos Street in the heart of the capital, the palace is a sample of the eclecticism of the architectural trends of the time, with a marked neoclassical style mixed with elements of the French Renaissance of the seventeenth century.

According to specialists, the most outstanding features of the work are the varied pediments, baseboards and columns topped by capitals of different orders on the main floor.

But more striking than its narrow lines is the eventful existence of the building, which after the death of its owners in the 1930s, was acquired by the Archbishopric of Santiago and in the 1960s was sold to a real estate company, used as a commercial gallery and later converted into a school for girls.

With each new use it was subject to all kinds of modifications until it fell into total neglect in 1970. Declared a National Monument in 1981, it was acquired by the Government in 2011, thus saving it from its definitive demolition.

Its costly restoration was completed in 2020 after four years of work and it is expected that after the transitory use of the constituents, it will definitely become the headquarters of the Directorate of Libraries, Archives and Museums and the National Monuments Council.

These works made it possible to rescue the original architectural values, especially in its façade, while the palace as such was enlarged with all the technological and logistical facilities to house the aforementioned cultural institutions.