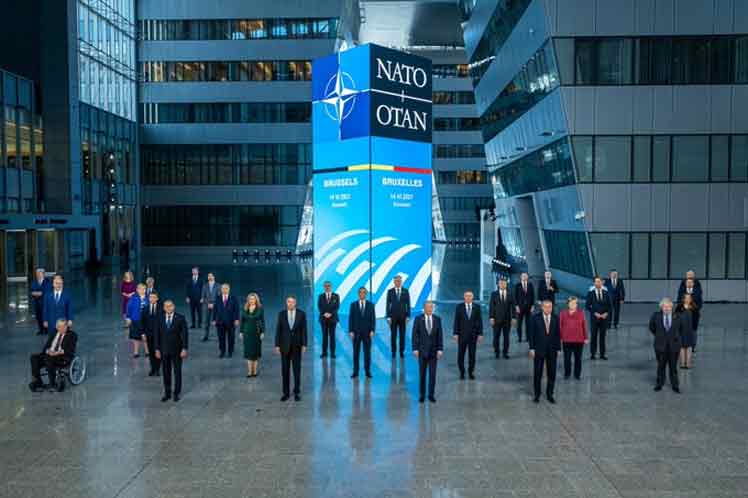 At the end of a face-to-face summit with the 30 heads of State that make up the Western military alliance, NATO ratified in a 79-point communiqué its publicized fight for peace, security and stability in the face of what it called multifaceted threats.

Among those challenges and dangers, the bloc mentioned Moscow and Beijing, whose powers it equated with terrorism, an international scourge against which the West shows double standards, including NATO, led by the United States.

We are increasingly confronted with cyber, hybrid and other asymmetric threats, including disinformation campaigns, and the malicious use of increasingly sophisticated emerging and disruptive technologies, the alliance added in the text.

NATO also ratified Spain as the host of the next meeting in 2022 and Lithuania as the next.

In that regard, the parties approved the NATO 2030 agenda in which it seeks greater adaptation to meet existing, new and future threats and challenges, based on the bloc’s current political and military adaptation.

Monday’s meeting, which was attended for the first time by US President Joe Biden, served to iron out the differences between Washington and the rest of the allies, after four years of deterioration under Republican Donald Trump.

Likewise, the alliance corroborated that the withdrawal of its troops from Afghanistan ‘does not mean an end to the relationship,’ by ratifying that it will maintain the ‘financial support and preparation of local troops,’ and the maintenance of an office in Kabul.

The military force also confirmed its interest, as in the past, in participating in anti-terrorist missions in other parts of the world, as NATO did against Libya in 2011, which led to the overthrow and assassination of Muammar Gaddafi and the still maintenance of political instability in the once prosperous State.