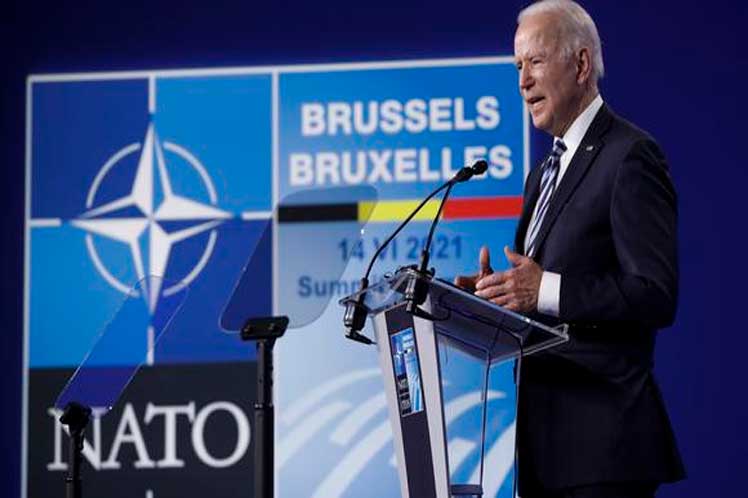 ¨I´m going to make clear to President Putin that there are areas where we can cooperate if he chooses. And if he chooses not to cooperate and acts in a way that he has in the past relative to cybersecurity and some other activities, then we will respond,¨ Mr. Biden responded.

Speaking live from Brussels, where the North Atlantic Treaty Organization (NATO) summit was held, Joe Biden said that Wednesday’s two-way meeting he will point out with his counterpart ‘where the red lines are.’

At a press conference, Biden said that other NATO leaders expressed their appreciation for the upcoming meeting with President Putin, whom he will talk to in Geneva, Switzerland.

When asked whether he still considers Putin a ‘murderer’ – as he called him in an interview last March – he responded laughing, but later he stated that Putin is bright, he´s tough and I found that he is, as they say when you used to play ball, a worthy adversary.

President Putin, on the other hand, praised the possibility of talking about bilateral issues and international policy, which he sees as a desire to get involved in joint work with the United States.

Russia always welcomes a proposal to meet for dialogue, even if it comes after hostile rhetoric, stressed Putin, whose idea is to discuss issues regarding strategic stability, regional conflicts, economic cooperation and ecology, among pivotal issues.

For him, meeting Biden will not be in vain if countries manage to establish avenues of action in separate areas.

On Monday, at the end of the face-to-face NATO summit, the alliance ratified in a statement the alleged threat from Russia and China to the bloc´s stability.

NATO considered Moscow and Beijing a danger and equated these two powers with terrorism, an international scourge against which the West shows double standards, including NATO, led by the United States.

Regarding Putin-Biden meeting, there is great expectation and, even though both governments assure they will not be able to solve all differences, debating issues including criminal cybernetic activity, stability and nuclear security, among others, is scheduled to hold.