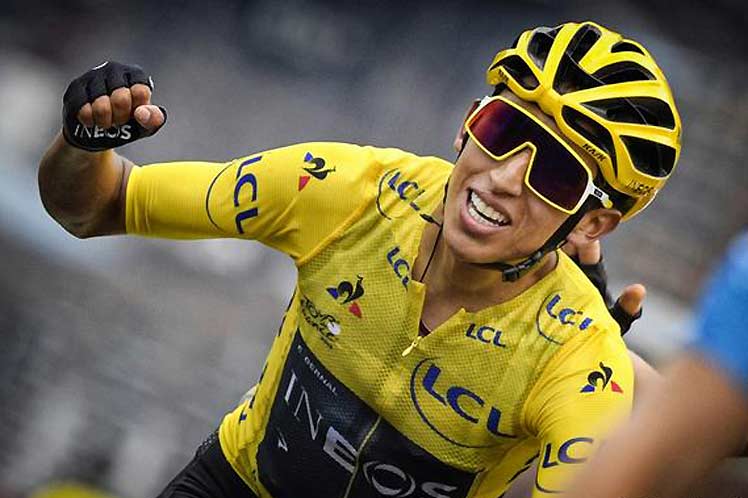 Paris, (Prensa Latina) The indomitable spirit and passion of Egan Bernal, recent winner of the Giro d'Italia, are part of the fiber of Colombian warriors in the world of cycling, capable of squandering sweat, tears and even blood in pursuit of the Crystal Cycling Trophy, the most demanded trophy of each season and awarded to the champion of the Tour de France.
Share on facebook
Share on twitter
Share on whatsapp
Share on telegram
Share on email

However, Bernal will not join the Colombian armada in the French race, scheduled from June 26 to July 18, but his sacrifice and strength will inspire his compatriots Nairo Quintana, Esteban Chaves, Rigoberto Urán and Miguel Ángel ‘Superman’ López, Colombia’s main assets in this sport.

Leader of the French team Arkea Samsic, Quintana will arrive at the Grande Boucle with the history of winning the ‘Vuelta a Asturias’, two subtitles (2013 and 2015) and a third place in the main French competition (2016); in addition to the crown of the 2014 Giro d’Italia and the 2016 ‘Vuelta a España’.

For his part, Chaves, of the Australian BikeExchange group, achieved a partial victory in Catalunya 2021 by conquering the queen stage and finished sixth overall, with three one-day successes in the Giro and two in the top Spanish race.

Another born winner, Urán, returns to the European roads after recovering from Covid-19, an illness that forced him to miss the Italian race with the US-based EF Education Nippo team.

Lopez, who missed the podium last year because he did not perform as expected in the last time trial and fell to sixth place overall, joins the list of strong candidates for the French competition.

‘The secret is in the regularity of the three-week race,’ admitted the Colombian, who is facing his first season with the Spanish Movistar team and has already won the 2021 ‘Vuelta a Andalucía’.

However, Latin America has another solid cyclist for the French program, Ecuadorian Richard Carapaz, one of the main spark plugs of the British Ineos.

The ‘Locomotora del Carchi’, as Carapaz is known, already won one of the big ones, when in 2019 he wore the pink jersey of the Giro, and also exhibits  second place of the 2020 Vuelta a España .

(Taken from the Orbe Sports Supplement)

Assassination of social leader in Colombia amid massacre condemned

Assassination of social leader in Colombia amid massacre condemned