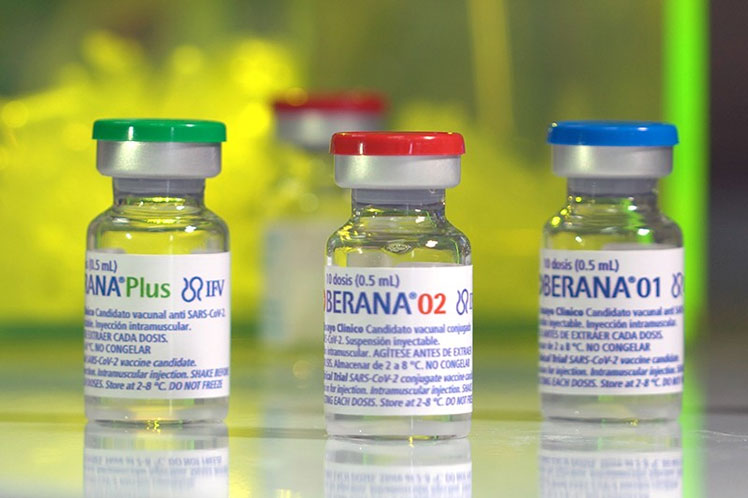 As part of the Strategy for the development of Covid-19 vaccine candidates, several forms of research, such as clinical trials, intervention studies and health intervention, are carried out, and all of them are aimed to demonstrate the efficacy of Soberana 02, Soberana Plus and Abdala (CIGB-66), three of Cuba’s own injectable vaccines.

The most recent statistics show that 2,223,404 Cubans have received at least one dose of the vaccines, and 1,624,505 volunteers have already been immunized with the second dose, Dr. Francisco Duran, national director of Epidemiology at the Cuban Ministry of Public Health (MINSAP), explained at his daily press briefing on television.

The immunization scheme designed in Cuba consists of three doses of these formulations, so 873,690 people have received them so far.

Cuba has other Covid-19 vaccine candidates: Soberana 01, developed by the Finlay Vaccines Institute, and Mambisa (CIGB-669), engineered by the Genetic Engineering and Biotechnology Center (CIGB).

The CIGB also announced that it will present to the regulatory authority another trial for children and adolescents with Abdala (CIGB-66), while Mambisa (CIGB-669), which will be administered nasally, will enter a Phase I/II clinical trial for those who had suffered from the disease.

The Cuban scientific community announced on Saturday evening the partial result of the 62-percent efficacy of the Soberana 02 vaccine candidate, a figure that already certifies it as a vaccine, according to the requirements established by the World Health Organization for Covid-19 projects.