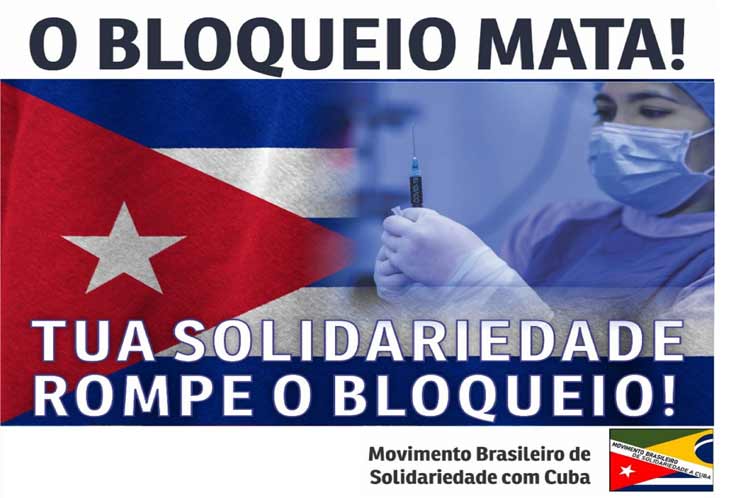 In the election at the United Nations on Wednesday there were three abstentions (Brazil, Colombia and Ukraine), and only the United States and Israel voted against the lifting of the blockade, which were isolated in the face of the demands of most of the international community.

According to the MBSC, the world shouted ‘down with the blockade against Cuba at the UN General Assembly, where 184 countries voted in favor of lifting the blockade, but the Brazilian government abstained.’

This way, it denounces, it joined the greatest enemy, ‘the US empire and the Zionist State of Israel, cruel murderers of innocent peoples.’

The blockade, the statement adds, ‘has caused so much damage to Cuba, a beacon of the Americas, a reference in health, education, human rights and the most supportive country in the world.’

For the movement, the Bolsonaro administration ‘acted against history, denying democracy, friendship and solidarity between the fraternal peoples of Brazil and Cuba.’

It adds that the executive violated the Brazilian Constitution ‘which stipulates the prevalence of human rights, self-determination of peoples, non-intervention, defense of peace and cooperation among peoples for the progress of humanity in its international relations’.

Unfortunately, the statement adds, ‘we could not expect a different attitude; a misgovernment that does not take care for its people, today acknowledged as genocide, ethnocide and ecocide, for the more than 500,000 Brazilians murdered with its extermination policy.’

An administration, the statement continues, which ‘is ferociously proceeding with its ultra-liberal fascist policy of exterminating the indigenous peoples once and for all and completely destroying the Amazon and our forests for the benefit of capital.’

According to the MBSC, Bolsonaro’s executive ‘did not hear the cry of the Brazilians and keeps the suffering, the deadly stifling of the Cuban people, due to a stupid blockade, imposed by the cynical government of the United States, for more than 60 years.’