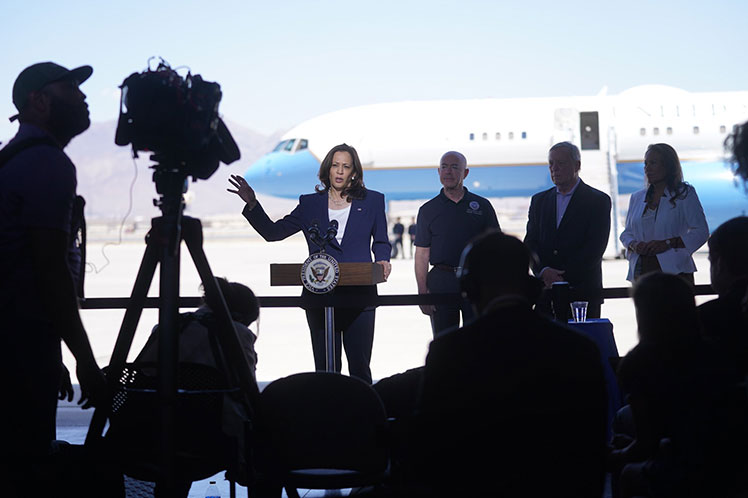 Cuerpo : Speaking to reporters after her tour, Harris stated the border trip reinforced the need to address the root causes of the surge in undocumented migrants from Central America.

The Secretary of the Department of Homeland Security (DHS) Alejandro Mayorkas and Senator Dick Durbin, chair of the Senate Judiciary Committee at the forefront of bipartisan immigration reform efforts, accompanied Kamala Harris on her tour.

Certain US media including NBC called this as a ‘politically tense’ trip after Harris had faced a drumbeat of criticism from GOPers in recent weeks for not having personally visited the U.S.-Mexico border yet.

Republicans capitalized on Harris and President Joe Biden´s no presence at the U.S.-Mexico border to accuse current administration of being weak in terms of border security, and thus seek to use afresh a powerful political weapon in view to the 2022 legislative elections, the Associated Press Agency reported.

The government repeatedly rebuffed the criticism, arguing that it was more focused on addressing the conditions that force thousands of migrants to head for the border.

Earlier June, Kamala Harris visited Guatemala and Mexico, where she delivered a blunt message to potential migrants. ‘I want to be clear to folks in the region who are thinking about making that dangerous trek to the United States-Mexico border: Do not come. Do not come,’ Harris said at a press conference in Guatemala on June 7. ‘I believe if you come to our border, you will be turned back.’

Kamala’s visit to El Paso comes a few days before former President Donald Trump visited the same area accompanied by Governor of Texas Greg Abbott and other Republican members of the House.

The number of migrants arriving in southern United States has increased unusually in recent months, since Biden´s assumption, and according to figures from the Customs and Border Protection Service, over 180,000 undocumented migrants were detained at the border.

While on the one hand the current administration is seeking to halt the wave of migrants to the United States, on the other hand it encourages irregular flow especially in the case of Cuban migrants, with whom Washington fails to comply with its commitment to grant a minimum 20,000 visas per year or to provide consular services in Havana.