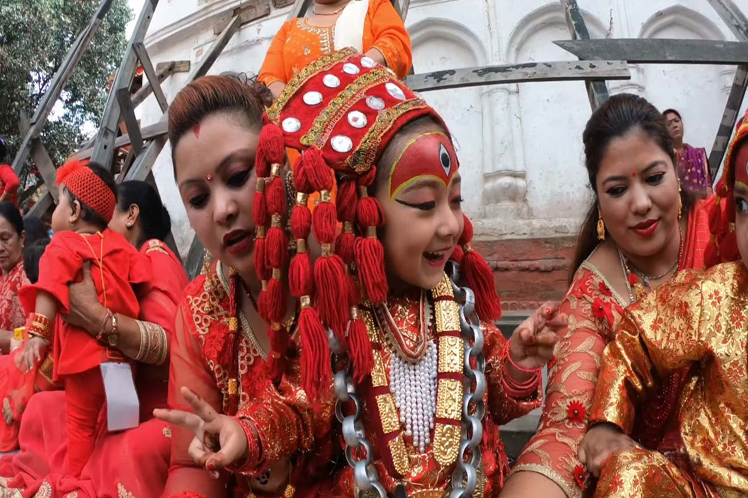 She is a little girl of three to five years of age, belonging to the Shakya caste of goldsmiths and silversmiths of the Newar community, who is believed to be the reincarnation of Taleju, one of the avatars of the Hindu deity Durga, who kills demons and represents the victory of good over evil.

The cult dates back at least to the Middle Ages and is very popular among Hindus and Nepalese Buddhists, who have worshipped and idolized the deity for 700 years, a remarkable example of the mix of religious traditions in the Himalayan country.

There are some 11 kumaris throughout Nepal, but the Kumari Devi or Raj Kumari (royal goddess) in the capital is the main one. To choose her, the elders gather hundreds of girls and only approve through an extremely strict selection process those with 32 auspicious signs of divinity, mostly related to natural perfection and symbolic traits.

The small group of candidates are then placed for a whole night in a dark room with 108 freshly severed buffalo and goat heads, and men dancing in demon masks; a frightening scenario for ordinary girls but not for the prospective deity, who shows no fear and is perhaps Durga’s own resurrection.

Once the new Kumari Devi, which in Sanskrit language means innocent, virgin and pure goddess, is discovered, the girl is transferred to the Kumari Ghar, where her needs and those of her caretakers are fully paid for by the Nepalese government, while she spends part of her time studying and performing religious rituals. She only leaves the temple a few times a year during festivals and her feet must never touch the ground.

The most important festival for the Kumaris is Indra Jaatra, a harvest celebration in late August or early September. On the third day of the festival, the Kumari Devi is carried around Durbar Square on a chariot, while the faithful surround her in a lively procession through the narrow streets of ancient Kathmandu.

The girl’s reign ends when she menstruates for the first time upon reaching puberty or bleeding for any other reason, even for a small scratch, after which the devotees assume that the goddess left her body to manifest herself in a new girl, whom the community must then seek out. Meanwhile, the girl goddess who returned to ‘being mortal’ receives a modest state pension.

Nepal to conduct vitamin A campaign for children

Nepal to conduct vitamin A campaign for children