Venezuelan security forces clamping down on gangs in Caracas 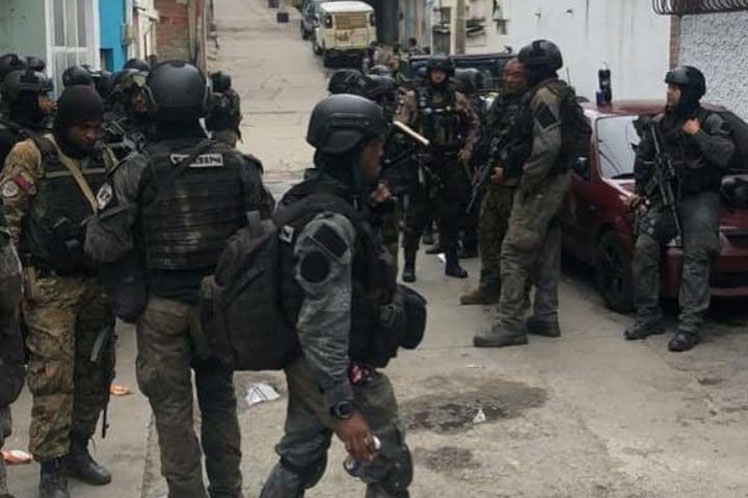 Venezuelan security forces clamping down on gangs in Caracas

Authorities reported the Special Actions Forces (FAES) were able to totally control ‘Cota 905,’ a densely populated strip of Caracas, the operation center of criminals Garbis Ochos, nicknamed Galvis, Carlos Revete (Coqui) and Carlos Calderon (Vampi), who are still wanted and are on the loose.

Venezuela’s Vice President Delcy Rodríguez called for a rally in the parish of El Paraíso as a show of solidarity with the victims of attacks by urban criminal gangs.

The special deployment of the Love in Action Plan for the victims of Cota 905 and the US blockade will take place in the small court of La Chivera, entrance through Victoria Avenue in that locality in the southwest of Caracas, scene in the last days of armed confrontations between the Special Action Forces and irregular armed groups.

The official reports and images circulating on social media show the moment when the Bolivarian National Police arrived in the homes of the ringleaders and members of the gangs, where they confiscated a large arsenal of war material, including weapons and ammunition.

The operation is still ongoing and transit is restricted in La Vega, Santa Rosalia, El Paraiso, San Juan and El Valle parishes; in the meantime, the ringleaders are still wanted, and up to half a million dollars is offered as ransom in exchange of information about their whereabouts.

Several operations led to the capture of some members of the gangs and rescue of hostages between Friday night and the early hours of Saturday.

On the other hand, Minister of Interior, Justice and Peace, Carmen Melendez, reported that the operations will continue for as long as it takes to free all the territories seized by the criminal gangs.