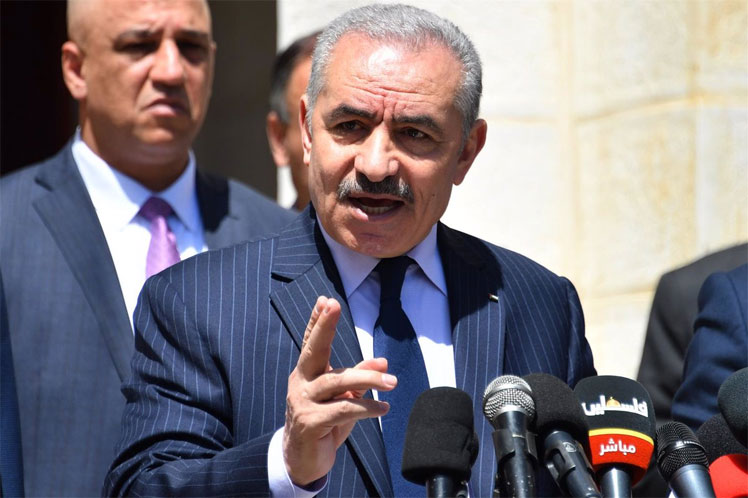 Upon receiving the new British Consul General in that city, Diane Corner, Shtayyeh emphasized that this measure was the reason why elections were postponed until a date to be determined.

Tel Aviv authorities, he said, put all possible obstacles to stop voting in the eastern part of the city, which the Palestinians claim as the capital of their future state.

As soon as the Israeli government allows the electoral process to develop in that area, as established by several signed agreements, we will set a date, he underlined.

For this reason, Palestinian President Mahmoud Abbas announced on April 30 the decision to call off the elections, scheduled for May 22.

After occupying the eastern part of Jerusalem in 1967, the Jewish State declared that city 14 years later as its eternal and indivisible capital, a position rejected by the international community and several resolutions of the UN Security Council.

Since then, the Palestinians have denounced Israel’s attempts to Judaize the city by colonizing and expelling the Arabs.

Precisely, this Thursday the Palestinian Minister for Affairs of that city, Fadi al-Hadmi, revealed that Tel Aviv forces demolished 62 Arab buildings in the eastern area so far this year.

More than 80 families are facing expulsion from the Jerusalem neighborhood of Batan al-Hawa by order of the occupation troops, who also plan to destroy 100 homes in the Silwan neighborhood, al-Hadmi explained during a meeting with Jordanian ambassador Muhammad Abu Windi.

The official warned about the increase in house demolitions, Israeli eviction plans and arrest campaigns against Palestinians in an attempt to impose a fact taken for granted.

The aggression requires immediate response by the international community to provide protection to the Palestinian people, Islamic and Christian sacred sites and end the occupation, he emphasized.

Under Israeli law, if a Jew proves that his family lived in East Jerusalem before the creation of the state in 1948, he can claim ownership, but Palestinians are denied that same right.

The UN humanitarian coordinator for the occupied territories, Lynn Hastings, visited yesterday the Jerusalem neighborhoods of Isawiya and Silwan, populated mostly by Palestinians.

After her tour, Hastings criticized the Israeli settlement strategy in the West Bank and East Jerusalem.

This policy makes it impossible for Palestinians to live safely in their own homes, she said.