Cuba is under a sophisticated cyberwar, says Diaz-Canel 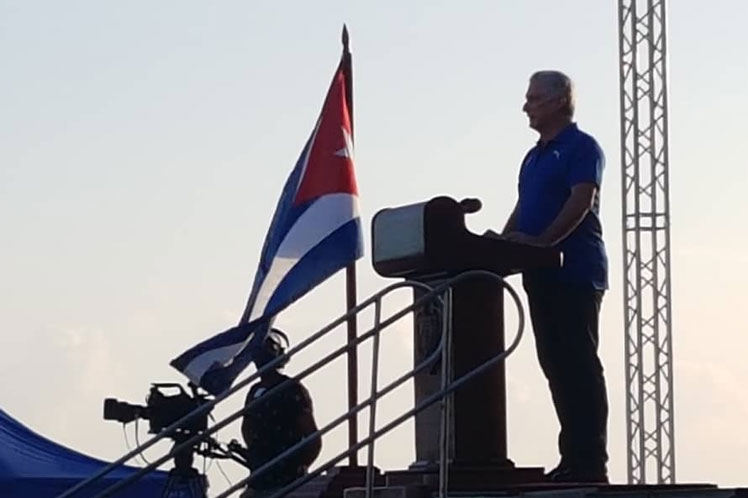 Cuba is under a sophisticated cyberwar, says Diaz-Canel

In a ceremony held in Havana´s malecon, the president highlighted that the allegations made by Foreign Minister Bruno Rodriguez about the political communication operation against Cuba with the US participation of the United States have not been answered.

So far, there has been no attempt to reply from the authorities of the Republican government of Florida about the funds allocated for those purposes, the head of State added.

Diaz-Canel referred to the riots on July 11, from which has emerged a bombardment of images full of violence, blood, protests, shouting, vandalism, threats, harassment and repression in the course of these six days.

However, the leader pointed out that it is all part of an intense political operation that had been brewing for weeks before, carried out by a large media intoxication platform financed by Washington and the Florida political machine.

Their goal was to encourage unrest and create instability in the country, he assured, for which they took advantage of the difficult conditions triggered by the Covid-19 pandemic, and the tightening of the US economic blockade with 243 measures imposed by the Trump administration (2017-2021).

The president commented they made use of artificial intelligence systems and Big Data, in addition to cybertroops, and boosted the artisanal manufacture of weapons and incendiary elements.

Diaz-Canel added that in all that they had the complicity of a transnational platform, which allowed them violating their own regulations with impunity, while disregarding legitimate complaints from users and some media outlets.

The president addressed the manipulated way in which they try to tell the incidents on Sunday, when they called for protests and then built a narrative to seek emotional reactions generating solidarity with protesters, in addition to blaming the government for urging to a civil war.

‘The route of infamy is clear,’ Diaz-Canel said, adding they tell the story backwards to distort what happened, regardless of the calls for unity and peace made.

Cuba is of love and peace, the president emphasized, calling on people to put their hearts to the homeland and the Revolution in order to win.