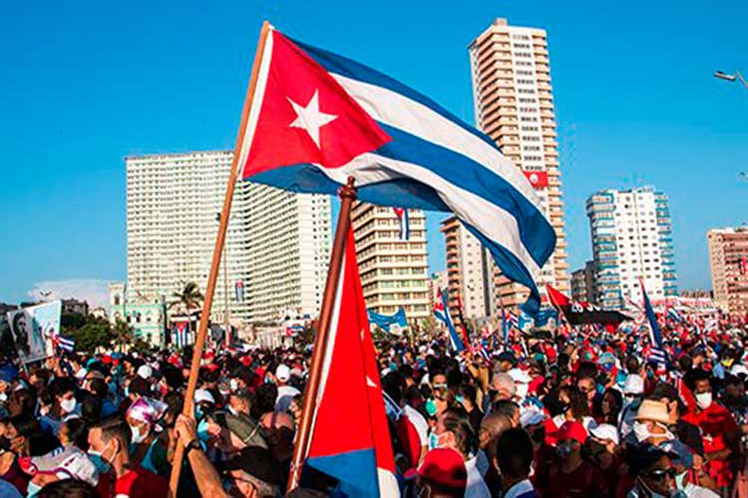 Several reports on the mobilizations in Cuba, mainly in Havana, were published in local media, which almost unanimously pointed out that it is not possible to hide the tremendous popular support for Cuban President Miguel Diaz-Canel and the historic leader Raul Castro, who was present in the demonstrations.

The main images broadcast on television, on social networks and in the digital press correspond to the rally in La Piragua, Havana’s Malecon, and ridicule the outbreaks of forced disturbances from the United States which failed miserably, as La Jornada reported.

What happened in Havana on Saturday was repeated in several towns nationwide, as a way for the people to show adherence to the government, and to demonstrate the strengths and anti-imperialism of the people despite the difficult situation caused by the blockade, the Covid-19 pandemic and the economic crisis that it has exacerbated.

‘Down with the Yankees!’, ‘We were born to win and not to be defeated!’ and ‘No to the blockade of the United States’, were shouts of a gigantic crowd gathered in the beautiful coastal avenue to demonstrate to US President Joe Biden that nothing has changed in the revolutionary convictions of the people.

The Mexican media also highlighted the significant rallies by Mexicans in front of the Cuban Embassy in Mexico City, as it had not been done for years, to show that in this country there are no changes in terms of the historic support that has always been given to Cuba.

On Sunday’s evening in Havana, Diaz-Canel insisted that the anti-government marches were artificially provoked through a campaign by anti-Castro groups in Florida, in the United States, with the endorsement of that government, and they do not represent the interests of the people.