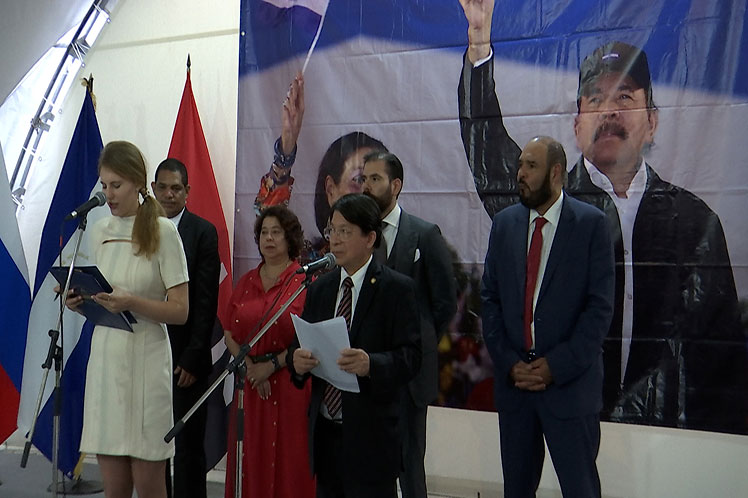 In a ceremony held at the headquarters of the Nicaraguan embassy in Moscow, the Minister of Foreign Affairs highlighted the strengthening of political, economic, commercial and defense ties between both States, strengthened in the talks held Monday with the Russian part.

It signified the important agreements established in the heat of bilateral cooperation, which grew 20 percent in 2019, although it was hit hard by the international impact of the Covid-19 pandemic, he said.

Moncada recalled that on July 19, 1979, the fate of the Nicaraguan people changed, ‘who always wanted to live free and in peace.’ He expressed that the country is moving forward, provides the population with free medical assistance, advocates for a creative economy, stimulates small and medium-sized enterprises, expands airports.

He emphasized that such projects are backed by a positive spirit of social justice and improvement of living conditions for all citizens of the country.

In another part of his speech, Laureano Ortega, representative of the Nicaraguan president for relations with Russia, described the Sandinista Revolution as the most beautiful, humanist project that the country and the Central American region have ever experienced.

‘We can proudly say that it is a revolution that unfolds with the support, friendship and direct brotherhood of Russia,’ he said.

He recalled that the Sandinista National Liberation Front has won three elections, promoted the economic and social development of the nation with a socialist, revolutionary project ‘that works hand in hand with Russia, for some, a bad example,’ he warned.

‘We have resisted with work, with the strength of the people. We not only endure, we thrive. All the polls say we will win the November elections. That means our Revolution continues to advance and remains in the hearts of all Nicaraguans, ‘he said.

At the event, the director of the Latin American department of the Foreign Ministry, Alexandr Schetinin, drew attention to joint agreements in the areas of health, the cosmic space, the confrontation with natural disasters, the preparation and training of human resources and transport.

‘The government and the people of Nicaragua can always count on Russia for the development of the country and the security of its State. We see the future of our relations with great optimism ‘, concluded the Russian diplomat.