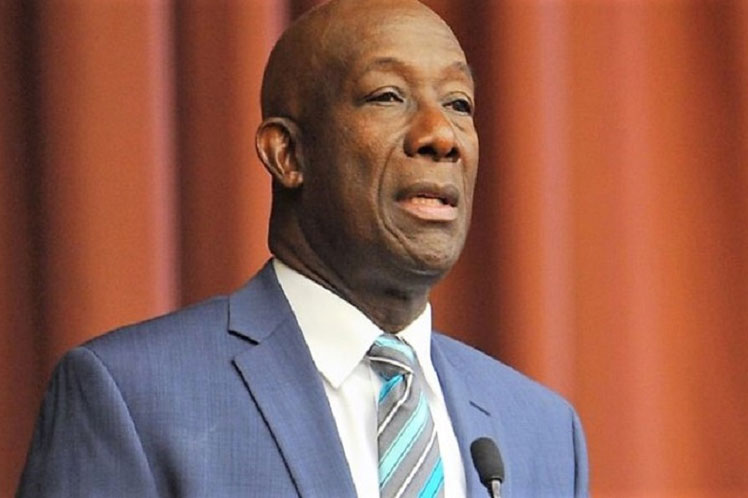 Rowley showed his dissatisfaction with a communiqué issued by foreign diplomats, in which they disregard the interim Prime Minister, Claude Joseph, in favor of Ariel Henry, appointed to the post by the assassinated President Jovenel Moise indicating the formation of the government, and dismissing the will of the Haitians and the role of the regional bloc.

‘Haiti is a full member of CARICOM, (…) and this lack of recognition and participation is an insult to all of us, coming from those who call themselves the ‘Core Group,’ he said.

‘By our own actions of bowing and kneeling to those who see us as unworthy and irrelevant, we have continually contributed to our own demise. Either we are a respectable CARICOM or we are sycophantic vassals deserving of such disrespect,’ he posted on his Facebook account.

I stand with my colleagues and sister nations that we may be small, but we must never accept being insignificant and inconsequential, the former Caribbean Community president added.

On July 5, Moise appointed Henry as Haiti’s Prime Minister by decree but the assassination prevented his investiture to the post, so Joseph continued to lead the government with the recognition of the United Nations (UN).

On Sunday, the ambassadors of the United States, France, Spain, Brazil, Germany, Canada, the European Union and representatives of the UN and the Organization of American States in Port-au-Prince pronounced themselves in favor of the recognition of Henry as Prime Minister.

Diplomats, grouped in the Core Group, are considered facilitators for Haitian stability; however, in practice they influence political decisions on Haiti, a behavior that analysts deem as interference.