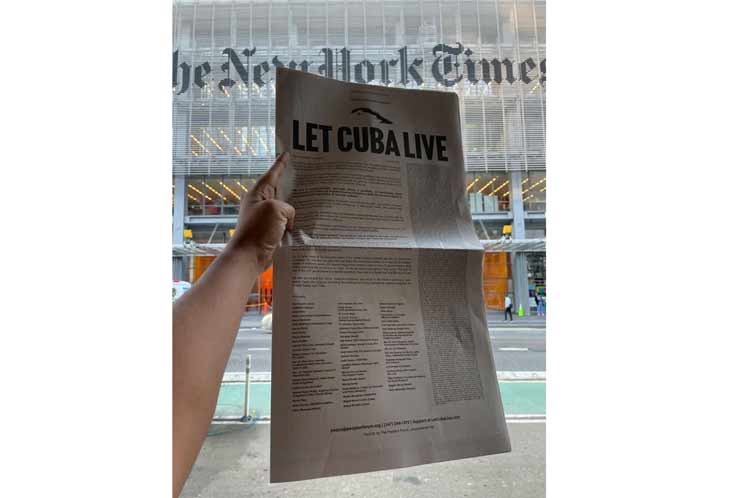 Referring in statements to Prensa Latina to the publication this Friday in the New York Times of a letter signed by more than 400 personalities who support Cuba, De los Santos explained that the initiative was born as a common effort between his organization The People’s Forum, the Answer Coalition and CodePink .

The Biden administration continues to claim it is concerned about the suffering of the Cuban people, but they do not even mention the blockade, a major impediment to the happiness of so many families on the island, he stressed.

It was necessary to reject such cruel positions of denying even the right to send / receive remittances in the midst of a pandemic, the activist added.

Everything was paid for by solidarity -he said- and the common effort of these organizations.

Signatories include American artists Danny Glover, Susan Sarandon, Jane Fonda, and Mark Ruffalo, the Rev. Jim Winkler, of the United States Council of Churches, and organizations such as Codepink and Black Lives Matter.

In the letter they exhort the current occupant of the Oval Office to take a turn in the policy of the United States towards the island nation, in particular to repeal the 243 measures adopted by his Republican predecessor.

They reiterate that, if the president really has an interest in helping the Cuban people, ‘if that is the case, we ask him to immediately sign an executive order and annul Trump’s 243 coercive measures.’

It seems inconceivable to us, especially during a pandemic, to intentionally block remittances and Cuba’s use of global financial institutions, something necessary for importing food and medicine, the text emphasized.

The letter comes to light when the democrat approved sanctions against Cuban authorities, as a result of the recent riots on the island and threatens to impose more, something that the Cuban government categorically rejects.

Last night in Union Square, 14th Street and 4th Avenue of the Big Apple, a huge light was displayed with the message Let Cuba Live.

The Movement of Solidarity with Cuba in the United States ratified last July 20 in this capital its commitment to the largest of the Antilles and intensifies its actions against the blockade.

Two containers with part of a load of six million syringes destined for vaccination against Covid-19 have already arrived at the Cuban port of Mariel, some 45 kilometers west of Havana.

The purchase of the supplies comes from the movement that managed to raise about 500 thousand dollars at the national level.

Since 1992, at the UN General Assembly, the majority voice of the international community has supported Cuba in the request for the lifting of this policy of suffocation.

On June 23, 184 countries of the 192 members of the UN voted to end the blockade, only the United States and Israel did so against it, Brazil, Colombia and Ukraine abstained.