Chile reaffirms support for Cuba against US blockade 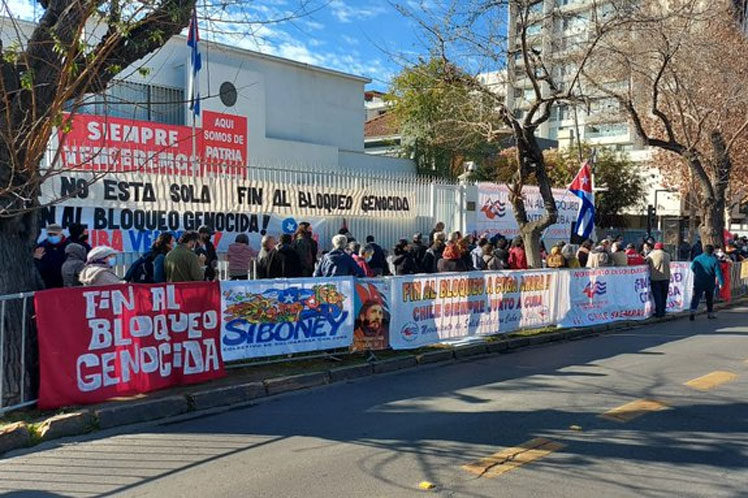 Chile reaffirms support for Cuba against US blockade

More than a hundred Chileans and Cuban residents here gathered once again called by friendship groups with the island and other organizations in a cultural event For Peace, to which the well-known singer-songwriters Francisco Villa, Guiliano Julio, Cecilia Concha and the duo Paloma y Sergio were invited.

The celebration was also motivated by the commemoration of the 68th anniversary of the attack on the Moncada and Carlos Manuel de Cespedes barracks, in the cities of Santiago de Cuba and Bayamo, respectively, on July 26, 1953.

That event marked the beginning of a vast political and insurgent movement on the island that would culminate years later with the triumph of the Cuban Revolution led by Fidel Castro on January 1, 1959.

At the celebration, the participants, carrying Cuban and Chilean flags, displayed numerous banners and posters calling for the lifting of Washington’s economic, commercial and financial blockade, which was tightened in the midst of the Covid-19 pandemic.

More and more people of all ages arrived as the morning progressed, filling the sidewalk in front of the Cuban diplomatic headquarters in the Providencia neighborhood of this capital city.

In the midst of music and in a festive atmosphere, the participants insistently chanted ‘Cuba, Chile greets you’, as an expression of the friendship between two peoples that have been historically linked by concrete gestures of solidarity.

In brief statements to Prensa Latina, many participants agreed in expressing the importance of supporting the island at a time when it is facing a difficult situation under the effects of policies that seek to stifle it economically.