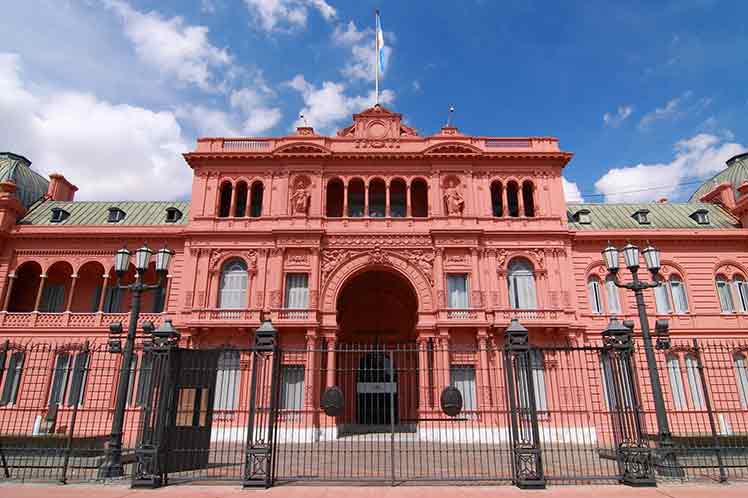 The building, located in front of the Plaza de Mayo -the square that mothers and grandmothers made theirs to claim for the disappearance of their loved ones during the dictatorship of 1976-, is easy to find when visiting the beautiful city of Buenos Aires and welcomes hundreds of people in its famous weekend tours, with free access.

It is yellow inside. Yes, yellow, and that was the first thing that caught the attention of this writer when entering the seat of the Executive Power of the Republic and was impressed by the beauty of the place, immortalized in hundreds of images and also in the most important events of this South American country.

With a long history, the Casa Rosada was built where, in 1580, the Fort of Buenos Aires and later the residence of the Spanish viceroys once stood.

After welcoming the authorities of successive national governments, what is today the monumental structure arose from the merger of the presidential headquarters and the Post Office Palace, which significantly overshadowed the facade of the building, so the then president Julio Argentino Roca requested in 1882 a project of expanding and repairing.

To join them, the Italian architect Francisco Tamburini, the same who created the wonderful Colon Theater, designed a large central arch at the entrance of Balcarce 50, whose construction was completed around 1890.

There are many curiosities and legends about the beautiful Casa Rosada, a place of interest for those who travel to the country. For example, the late Roque Sáenz Peña was the only president who lived there, from 1910 to 1914.

It is one of the most transformed buildings in the city. So much so that if you look closely you will notice that it is not symmetrical.

Among its peculiarities is the so-called White Room, surrounded by false doors covered with mirrors, designed to give a feeling of greater amplitude.

It is said that President Domingo Faustino Sarmiento is responsible for its pink color. There are two theories: one of them is due to the symbolic fusion of two parties, unitary and federal. The former, associated with white, and the latter, with red. The mixture resulted in the final shade. The other is that it was simply decided to embellish the Executive Power headquarters and the main painting technique of that time was used: the use of bovine blood and lime to give more durability.

Perhaps, one of the most emotional spaces when visiting the building, where so many presidents have passed, besides the access to the office of the current president and the vice-presidency, is the hall dedicated to the late Eva Perón. From there you can access the balcony on the second floor, which has witnessed the interventions of rulers at key moments in the history of the nation.

From this perspective, the Plaza de Mayo is imposing.

In addition, the Casa Rosada has been the scene of great farewells, such as the recent funeral of the legendary soccer player Diego Armando Maradona.