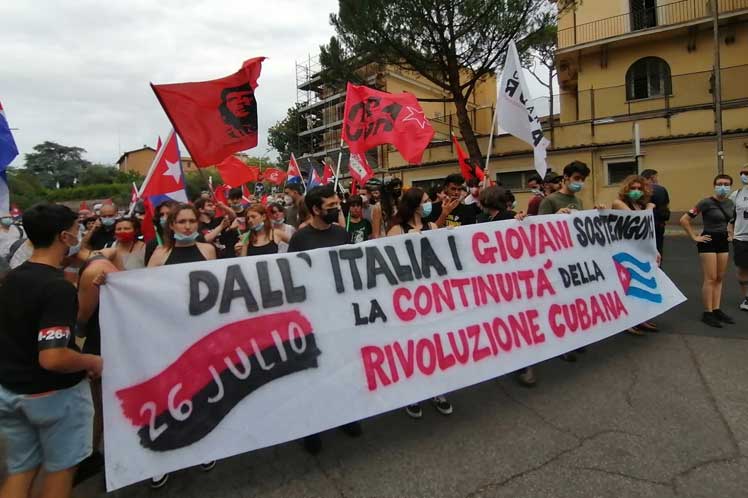 Hundreds of Italians and Cubans from a wide range of political and social organizations gathered in Plaza Santa Prisca from where they marched in a compact group to the Cuban Embassy in Italy, where the memorable demonstration, distinguished by its magnitude, dynamism and colorfulness ended.

The end of the US economic, commercial and financial blockade of the United States and respect for the sovereignty and independence of the Caribbean nation were the main topics of the mobilization in salute of the 68th anniversary of the attack on the Moncada Garrison and the Day of National Rebelliousness.

Cuban flags and those of the July 26 Movement, posters and banners with phrases related to the occasion stood out in the rally, which he had a notable presence of young people.

‘I am Fidel’, ‘Cuba Yes, Blockade No’, ‘Cuba Yes, Yankees No’ and ‘The united people will never be defeated’ were some of the slogans repeated by protesters, while the national anthem and that of the July 26 contributed to underline the patriotic and solidarity significance of the activity.

Several speakers intervened to demonstrate their unconditional support for the Cuban people and their Revolution in the complex situation caused by the blockade, the impact of Covid-19 pandemic and the reinforcement of the aggression by the United States government.

The unity nature of the mobilization and the defense of Cuba as a point of convergence of the different organizations participating in the event, regardless of their differences on other points, were highlighted aspects in the speeches.

Ambassador Jose Carlos Rodriguez highlighted the ‘tremendous emotion we are feeling with this demonstration’ and thanked everyone ‘for ratifying solidarity with Cuba and its Revolution’.

Noting that ‘we are living decisive moments’, the diplomat indicated that the enemies of the Cuban Revolution, whom he identified as the same of progress and justice in the international arena, believe that the time has come to destroy it, ‘but they are wrong, because it is alive and more alive than ever’.