The letter has been signed by 400 international personalities from politics, culture and science.

The Havana Initiative has been linked for years to cultural and scientific sectors in Cuba and works to lift US blockade against Cuba and strengthen ties between the two countries.

In late June, the above-mentioned group delivered to the representation of the German delegation in the European Union (EU), the Ministry of Foreign Affairs and the United States Embassy in Berlin a petition that they began in 2020 to lift the blockade against Cuba.

Such an action was supported by more than 60 personalities from German culture, science and society and gathered more than 73,000 signatures of support, a statement from the solidarity organization highlights.

Just at the time, the international community reaffirmed its rejection to the cruel policy of the United States with the vote in favor of the Cuban resolution to put an end to this siege by 184 countries in the United Nations General Assembly, it recalls.

In a recent press release, the group reported that during the meeting at German Foreign Ministry, Secretary of State Nils Annen reiterated that this country would continue to stand for the end of unilateral sanctions. 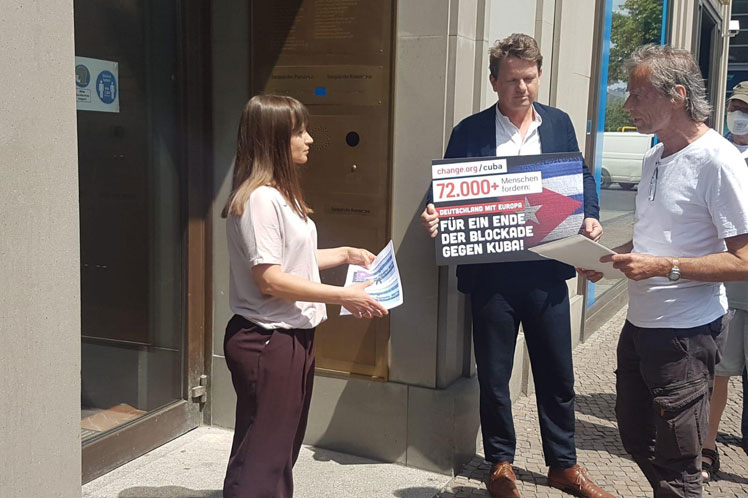 Hesse thanked Havana Initiative for its important political work and promised to convey the concerns to officials in Brussels.

Meanwhile, the Office of Public Correspondence of the United States Embassy in this city responded that its government was using sanctions as part of a policy aimed for a ‘prosperous Cuba’ and that measures were constantly reviewed to verify their effectiveness.

Washington imposed more than 240 measures in recent years that further reinforced the genocidal blockade against Cuba, especially in the middle of Covid-19 pandemic hitting the world.

Havana Initiative also denounced that past protests on the island led to destruction of state institutions and looting of shopping centers.

It also affirmed that consequences of the sanctions and the effects of the pandemic caused the worst economic crisis in Cuba since the 1990s.