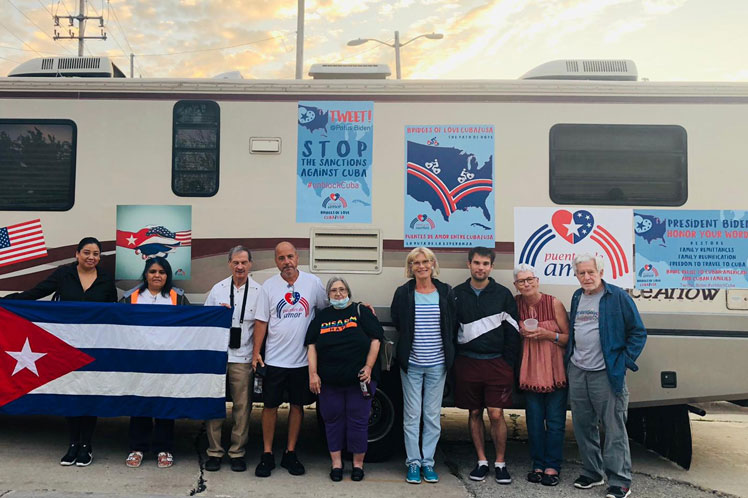 We want this claim to be not only the movement of a group of Cuban-Americans, but to turn it into something that is at the root of the struggles for demands for social justice in this country, the main promoter of that project, Carlos Lazo, told Prensa Latina.

Now we are heading to Minneapolis, Minnesota, to meet with brothers who are waiting for us to talk about these issues and prepare joint work plans, he noted.

Bridges of Love made a walk in recent weeks from Miami, Florida, to Washington DC, where they were joined on July 25 by several people in front of the White House to demand that US President Joe Biden lift the blockade and sanctions against the Cuban family.

In the US capital, they also held nearly a dozen meetings with congress people or their representatives to ask for the end of Washington’s blockade against Cuba.

They left for Chicago, where they were welcomed by a group of people who support the lifting of the sanctions that weigh on the Cuban people, including City Councilor Byron Sigcho Lopez.

We arrived in Milwaukee, Wisconsin, yesterday morning, Lazo said, and met with community members to discuss the blockade and sanctions. We share details of our pilgrimage and create alliances, because the majority of people support the lifting of the US blockade, the activist noted.

‘We have also educated ourselves in the other blockades, in those that exist here in the United States against minorities, poor people…’

These are very fruitful conversations in which plans are made to work together in the future, both for the lifting of the sanctions on Cuba and for other causes of social justice in the United States, he added.

Bridges of Love will continue fighting for that, the Cuban-American professor stressed.