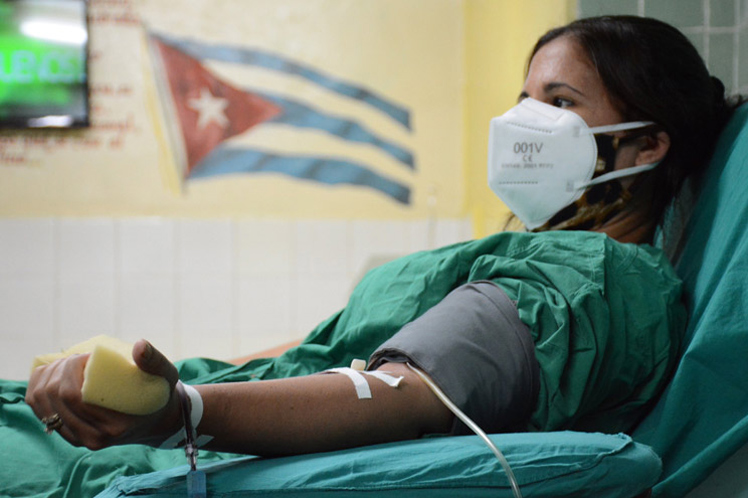 The head of the national blood program at the Ministry of Public Health (MINSAP), Delia Porto, told a press conference that the call on Cubans to donate blood has at its center the people who are convalescent or were vaccinated against the disease.

‘With the plasma that goes to the industry, a blood byproduct is developed, the anti-SARS-CoV-2 gamma, and we already have a group of recovered and vaccinated people whose blood further enhances that concentration of antibodies that today is needed in laboratories to produce this gamma globulin,’ Porto noted.

The expert explained that all healthy people from 19 to 65 years of age, or with controlled pathologies (high blood pressure, diabetes, among others), can go to the blood banks of their territories to donate, as well as convalescents who are epidemiologically discharge or people who received the complete scheme of vaccinations and feel well.

This gamma globulin, which already had a first production in the laboratories of BioCubaFarma, a group of biotechnology and pharmaceutical companies, is administered to infected people whose evolution is not favorable and are identified with onset of severity. A recent clinical trial started with this alternative drug, which complies with an entire protocol based on the characteristics of the patients included, the specialist remarked.

She added that 30 seriously ill adults were enrolled in the study to evaluate the safety and antiviral effect of the drug, and to measure the anti-inflammatory and clinical response during treatment.

The group was made up of men and women between 19 and 75 years of age, and with less than 10 days of evolution of the disease from the onset of symptoms.

‘Even though the national donation plan continues to cover medical assistance for the maternal and child program, transplants, and major surgeries, it is a reality that there is a shortage due to the complex epidemiological situation we are experiencing,’ said Porto.

However, she concluded, there is a guarantee for Cuban families that the necessary blood will reach their relatives, through the network of banks that exists in the country.