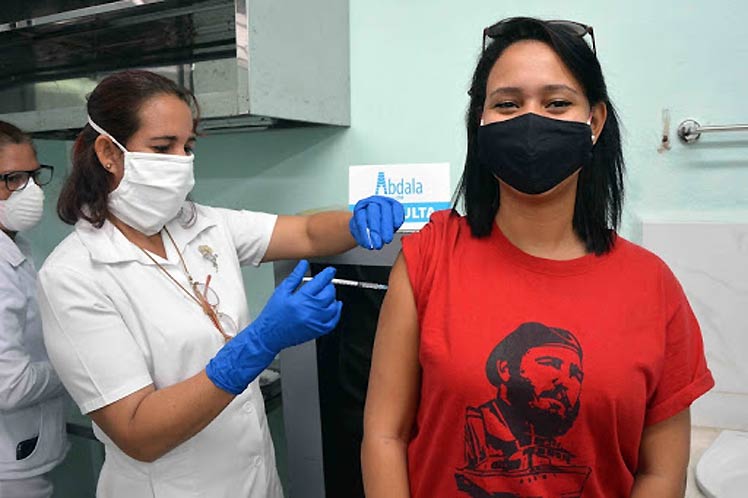 Until August 9, Cuba has administered more than 11 million doses of the vaccine candidates Soberana 02 and Soberana PLUS, as well as the Abdala vaccine (the first in Latin America and the Caribbean).

Cuba is advancing in the effort to immunize its entire population with its own Covid-19 vaccines, despite the economic, commercial and financial blockade imposed by the United States for six decades, by virtue of which Cuba has been denied the right to acquire technologies, medical supplies and raw materials necessary for health care.

However, on July 15, US President Joe Biden publicly referred to Cuba as a failed state and disqualified its ability, its health and science system to respond to the challenges of the current epidemiological situation due to Covid-19.

Faced with this misinformed statements aimed at distorting reality, a broad representation of scientists, doctors, and the Cuban and international population addressed a letter to Biden that demonstrates Cuba’s achievements in health matters and specifically in facing the pandemic.

In the letter, they highlighted that immunization has been part of Cuba’s public health system since 1962 (when the National Immunization Program was created), which guarantees free and universal vaccination of the people, regardless of their socioeconomic, political, religious, or social status, gender or race.

This way, since 1999, all Cubans have been protected against 13 life-threatening diseases, including diphtheria, tetanus and whooping cough, and eight of these vaccines are made in Cuba.

As a result of high immunization rates, not a single case of measles has been reported in recent decades.

Cuba maintains close collaboration on these issues with the World Health Organization (WHO) and the United Nations Children’s Fund (UNICEF), international organizations that have confirmed that Cuba’s child vaccination rates exceed 99-percent coverage.

Precisely, none of these organizations suggested the need to intervene in Cuba to administer vaccines, as the United States Government recently did.

Rather, they requested the help of Cuban experts in the global efforts to eliminate diseases such as polio or to export Cuban-made meningitis vaccines to Africa urgently.

The letter addressed to President Joe Biden calls for lifting the sanctions and coercive measures imposed on Cuba by the Governments of the United States, respecting the country’s achievements and greater collaboration between the two nations to fight the pandemic.