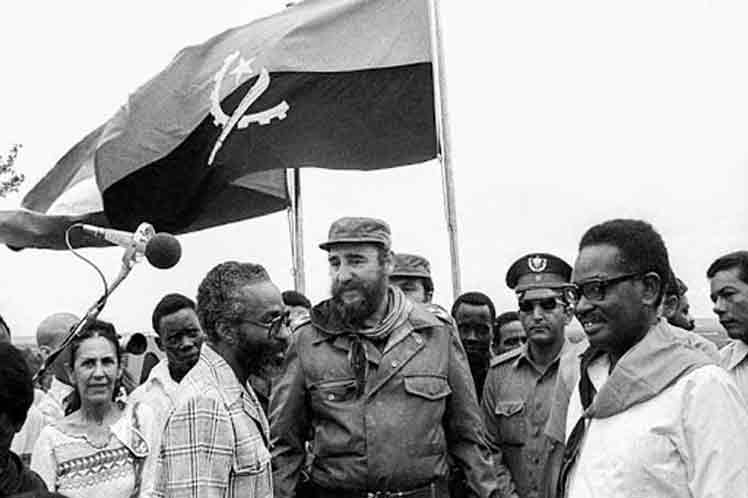 Under biosecurity measures imposed by Covid-19, a school in Luanda served as the setting for the meeting, to which the island’s diplomats were invited, with Ambassador Esther Armenteros as the head.

The meeting took place at ‘Comandante Fidel Castro Ruz’ Technical Institute of Health, a site evoking the close ties of brotherhood between the two peoples, Armenteros and the press and culture advisor, Raúl González, said.

It was a symbolic ceremony, with a reduced number of participants due to the pandemic, ‘but we could not ignore Fidel’s birthday’ on August 13, principal of the school, Antonio Pacavira said.

As he estimated, ‘Cuba is the fruit that never fell and will never fall’, although US governments maintain the Monroe doctrine, assumed since 1823 under the idea that Latin American countries would fall like ripe fruits in the hands of Washington.

The graduate in Psychology highlighted the international repudiation to the economic, commercial and financial blockade imposed on the Caribbean country more than half a century ago by the northern power.

‘They punish the Cuban people because their Revolution is an example of solidarity for the world, the speaker considered, he regretted the use of social networks to spread lies and fake news about everyday reality in the island state.

If Fidel Castro were with us now, he would be calling for global cooperation and solidarity to fight Covid-19, the only way to end the disease, the intellectual said.

For his fellow countryman Nuno Francisco, director of the association of former Angolan students graduated in Cuba, that nation will always be able to count on the support of the African peoples.

‘I came to Isle of Youth (in the south of the Cuban archipelago) when I was only 13 years old and I returned after finishing university; for that reason, I always say that I am the son of two revolutions, of two brother peoples’ , he asserted.

According to retired professor Viegas Baptista, he was part of the first groups of young Angolans trained on the island, where his first-born son was born and years later the two daughters studied medicine.

At 67 years of age, he told Prensa Latina, he feels ‘rejoiced and happy’ for an experience of cultural improvement, which also gave him the opportunity to be a teacher of students from his country in Cuba.

‘He taught Portuguese and geography and history of Angola, essential issues in the training of those students, far from their homeland’, the teacher explained.