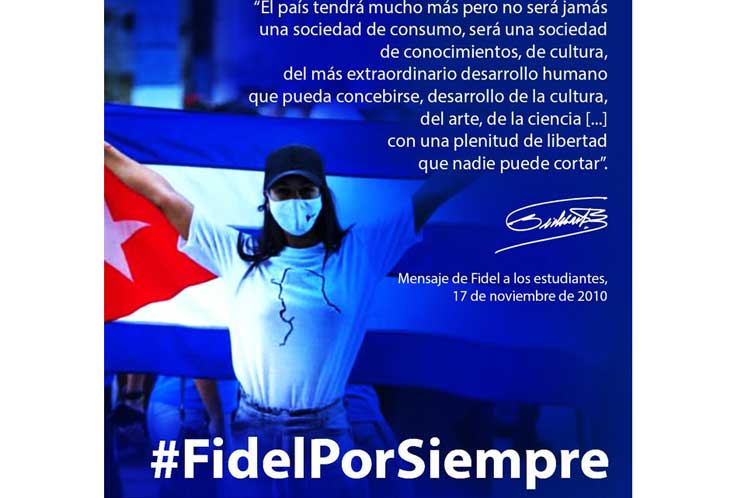 The Cuba Solidarity Movement, which brings together some twenty groups throughout Chile, called for a main ceremony to commemorate the date in this capital on Saturday, under the slogan ‘I am Fidel’, at the foot of the monument to Jose Marti, in the Yungay neighborhood.

Meanwhile, on Twitter, the Broad Command of Solidarity with Cuba, with hashtag #Fidelforever, highlighted that ‘his name is present in the resistance of the Cuban people and in the struggles of the peoples of our America.’

On the same social network, the member of the political department of the Communist Party of Chile, Juan Andres Lagos, quoted the words of the Cuban leader at the United Nations Conference on the Environment in June 1992, when he said:

‘Let us pay the ecological debt and not the foreign debt. Let hunger disappear and not humankind.’

The Siboney group, from this capital, a member of the Cuban Solidarity Movement in Chile, pointed out that ‘Fidel is Humanity, Cuba is Humanity’ and emphasized the adherence of its members to the celebration of the Cuban leader’s 95th birthday ‘with the same force like always on this important date.’

On the same idea, the Jose Marti Association, from the southern city of Concepción, highlighted in several tweets the thought of Fidel Castro and his total validity on issues such as solidarity among peoples, internationalism, independence and the struggle for peace.