Ukrainians pay tribute to Fidel on 95th anniversary of his birth 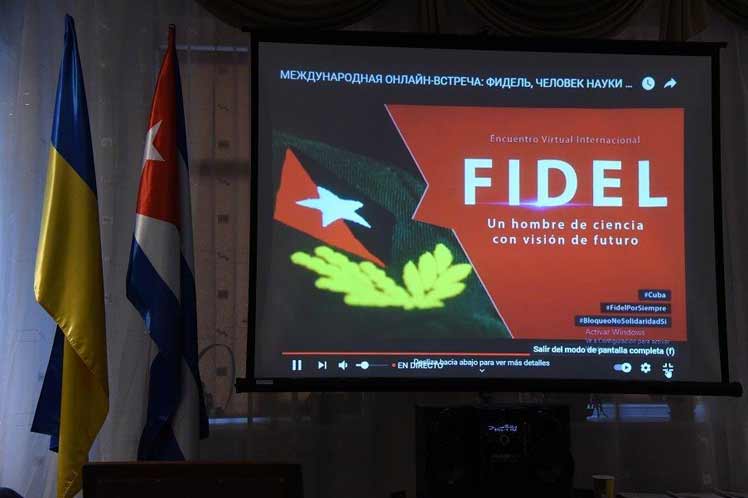 Ukrainians pay tribute to Fidel on 95th anniversary of his birth

Held the day before at the headquarters of the Cuban representation in Kiev, the meeting followed the international virtual event ‘Fidel; a man of science with a vision of the future ‘, organized by the Executive Secretariat of the Sao Paulo Forum and the Communist Party of Cuba.

Among the attendees were the honorary consul of Bolivia, José Tordoya, directors and members of the Ukraine-Cuba Friendship Association, the Ukrainian Committee Stop Blocking Cuba, the Parliamentary Group of Friendship with Cuba and different veteran associations.

Also representatives of the International Chernobyl Fund, of the non-governmental organization Niños de Tarará; of the parties Opposition Platform-For Life and Union of Left Forces of Ukraine, among other friends of Cuba.

According to Cuban ambassador to Ukraine, Natacha Díaz, the members of the Ukrainian solidarity reiterated their gratitude to the Cuban people and their historical leader, Fidel Castro Ruz, who highlighted his humanism and his defense of internationalism.

The president of the International Chernobyl Fund, Alexander Bozhko and the professor and pediatrician Victor Nedelko, shared anecdotes about the process of selecting and sending Ukrainian children affected by the accident at the nuclear power plant to Cuba.

On his side, the Lieutenant General, Hero of Ukraine and current deputy, Grigory Omelchenko, recalled his relationship with the Commander-in-Chief during his visits to Cuba and Angola. He highlighted the visionary spirit of the Cuban leader and his simplicity in interpersonal relationships.

The participants in the meeting expressed the eternal gratitude of the Ukrainian people for the more than 20 thousand children, victims of the Chernobyl nuclear catastrophe, who were cared for free in Cuba.

They reaffirmed their unconditional support for Cuba and their demand for the lifting of the genocidal blockade imposed by the United States against the Caribbean island.