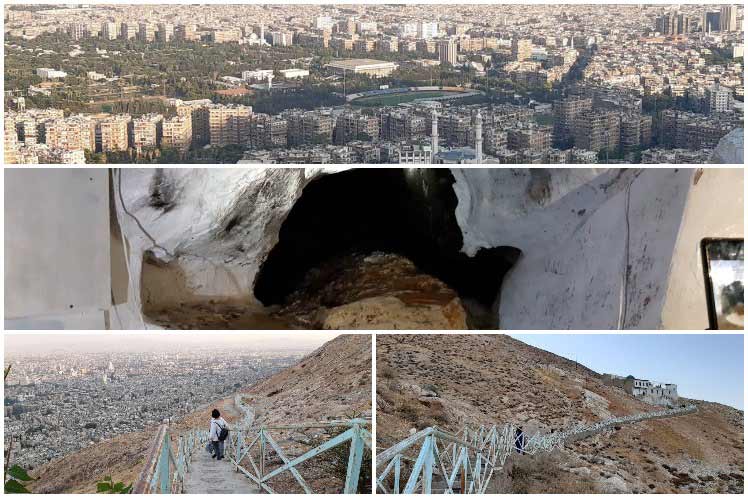 Although it is not as large as others, this city contains thousands of monuments, some of which are noticeable and famous and regularly visited by the public, while others are mysterious and inhospitable.

One of these places not visited often by city dwellers is an archaeological sanctuary located on one of the slopes of the emblematic and famous 1,151 meter high Mount Qasioun, at the foot of Damascus.

Qasioun means hard and dry in the Syriac language and these are the characteristics of the rocky and bare prominence that has no vegetation or water, but is home to places that witnessed important events.

On the southeastern slope of the mountain is the so-called Blood Cave (Magharat al-Dam, in Arabic) which, according to legend, was inhabited by Adam, the first human being, and where, according to Arab history books, Qabil (Cain) killed his brother Habil (Abel).

In the 16th century a small mosque (Al-Arbayeen) was built over the cavern containing 40 prayer niches (miḥrabs); for hundreds of years the inhabitants of the city and its rulers would ascend to the site and pray for rain, especially in times of drought, because prayers, they say, are answered immediately.

It is not easy to reach the area, you have to travel in vans that zigzag between the hills erected on the side of the elevation. Afterwards it is necessary to climb a stairway made up of almost 650 steps on the flank of the mountain.

From the site you can see a splendid panorama of the beautiful Damascus, the oldest capital in history that was alive seven thousand years ago. Also visible are the green farms of Eastern Ghouta and the southern neighborhoods that were the scenes of heavy fighting during the last decade.

The Al-Arbayeen Mosque has two floors: inside the first floor are the 40 mihrabs representing the equal number of guardians protecting the city, while in the basement is the mysterious reddish cave, the color of Abel’s blood, according to legend.

It is also said that when Cain murdered Adam’s second son, the mountain wept and his tears still flow inside the cavern.

You can also see in a corner the hole in the shape of teeth and tongue that, according to the story, is the open mouth of the elevation before the crime.

The place is visited by people of all walks of life, as it was previously a monastery during the Roman era and a pagan idol in the Aramean period, and was converted into a mosque in the 16th century.