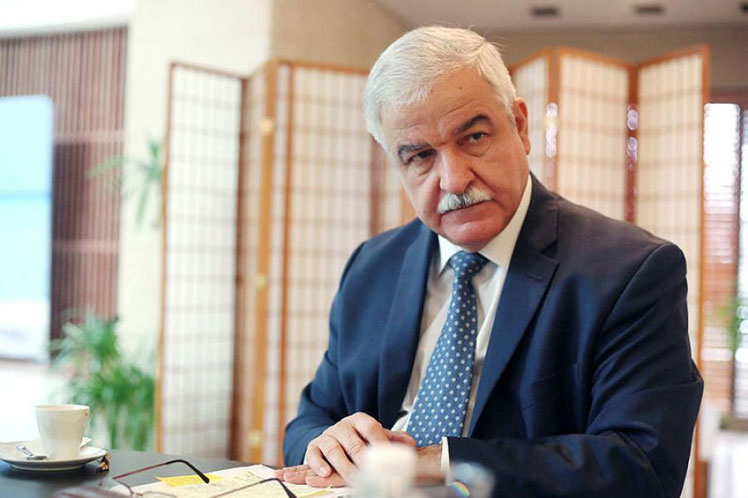 At the meeting, the diplomat referred to the 243 measures applied in recent years against Cuba by the Trump administration (2017-2021), maintained by President Joe Biden, who added other sanctions.

‘The inhumane character of the blockade is aggravated and becomes even crueler amid Covid-19,’ the head of the Cuban diplomatic mission in Moscow highlighted during the virtual meeting coordinated by the head of that Russian Committee, Lena Loshkina.

The diplomat pointed out that Washington is using that policy, and particularly its extraterritorial component, to deliberately deprive the Cuban people of pulmonary ventilators, facemasks, diagnostic kits, among other medical materials necessary to fight against the SARS-CoV-2 coronavirus.

Garmendia explained that along with the consequences of that policy, Cuba is facing the global economic crisis caused by the Covid-19 pandemic, and its impact on the arrival of tourists to Cuba, one of the most important sectors of its economy. The diplomat called attention to the high responsibility of the White House in the riots that took place in the country on July 11, not only because they are the result of over 60 years of economic warfare, but also because of the time in which it has applied a policy of maximum pressure against the country.

Regarding the situation in Cuba, he noted that peace and tranquility reign in the country. He explained that productive activities continue to be carried out, and that the country’s institutions are functioning normally, within the framework of the sanitary restrictions established due to the pandemic.

The diplomat underscored that despite the attacks of the enemies of the Revolution, Cuba is a country of peace that promotes solidarity and welfare of all the peoples worldwide.

The ambassador asked Cuba’s friends to disseminate the truth about what is happening in the country by all possible means, and noted the statements and multiple expressions of support coming from the people, institutions and the Government of Russia.

In that sense, he thanked for the humanitarian assistance sent to the nation to mitigate the economic difficulties and the scarcity of resources for the fight against Covid-19.

Garmendia also highlighted the national campaign arranged by the Russian Society of Friendship with Cuba to raise funds for the transfer of new amounts of aid to the country, and answered questions from the participants in the videoconference.