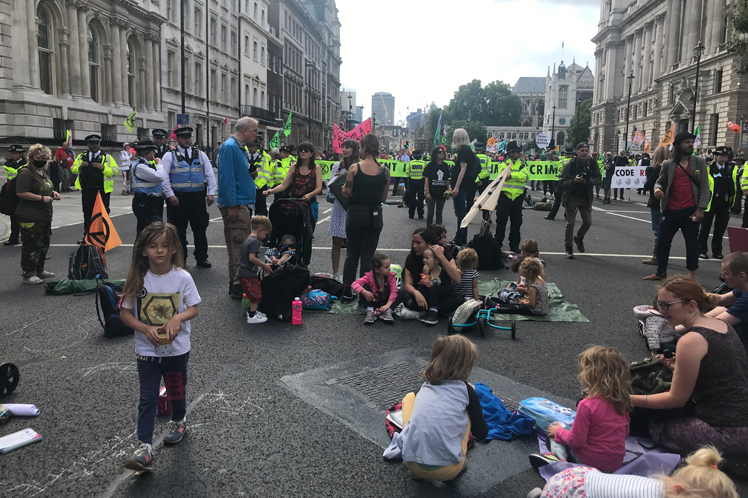 Several protesters called by the environmental movement Extinction Rebellion (XR) lay on the pavement behind a large green cloth accusing the ‘government of getting into bed with climate criminals,’ while others danced and sang to the beat of drums. .

We are here because the government does not tell the truth about climate change and what it will mean for our children and grandchildren, one of the activists who said her name was Mary told Prensa Latina.

According to the member of XR, an organization that defines itself as peaceful, the authorities of the United Kingdom and other developed countries try to hide from people that the lack of food and water is a consequence of this phenomenon.

Mary considers, in turn, that the promises made by British Prime Minister, Boris Johnson, to reduce carbon emissions to zero by 2050 and his plan to replace gasoline and diesel vehicles with electric ones are ‘too few and they are too late’.

We need to act now, because there are people in the Global South who are already suffering terribly, and there are even wars for resources affected by climate change, she said.

Juliana, a Brazilian living in London who, like other protesters, attended the protest accompanied by her children, explained that she brought them with her because the future of the new generations is in danger.

The British environmental group, which also requires the government to declare a climate emergency and allow citizen assemblies to decide policies to address climate change, announced that its so-called ‘Impossible Rebellion’ will last for two weeks, after a pause of several months due to the Covid-19 pandemic.

In addition to its usual demands in central London, XR plans to also focus on the City’s financial district, where the offices of banks that finance fossil fuel companies are located.

Although the protests are developing peacefully so far, the Metropolitan Police reported that at least 50 people were arrested between Monday and Tuesday.