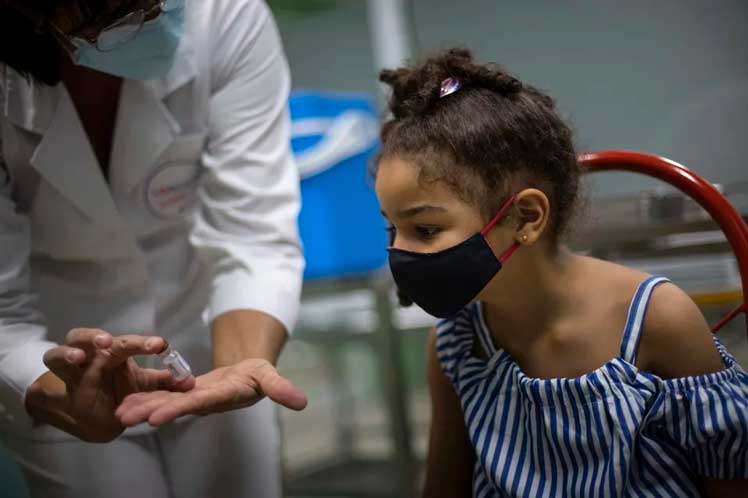 According to the Twitter account of the Finlay Vaccine Institute (IFV), the process took place with the participation of actors disguised as clowns, who made the waiting period more entertaining for the little ones.

The selection of children under 12 was made after the safety of the first dose of the Soberana 02 scheme was proven in adolescents, who had a medical follow-up of 24, 48, 72 hours, and another one week after immunization.

Based on those results, a report was drafted to receive the approval of the Center for State Control of Medicines, Equipment and Medical Devices, the regulatory authority, on the inclusion of the rest of the younger children, and the sample of adolescents was expanded to 150.

Last week, the first group of 25 teenagers (from 12 to 18 years old) of the trial was given the last dose of the schedule, with the Soberana Plus vaccine, and today the younger children will receive it.

According to IFV, creator of the antigen, the heterologous scheme administered in the pediatric study, showed a 91.2 percent efficacy against symptomatic disease in 3rd phase trials in the adult population.

The same test revealed 75.7 percent against the infection and 100 percent to prevent serious or severe cases and equal value against deaths.

Recently, the IFV’s research director, Dagmar Garcia, detailed that the scientific and healthcare authorities expect to have the first data results from the research in pediatric ages by the end of August, and beginning of September in order to present the necessary documents to start mass vaccination in that population.

On August 20, the national regulatory entity authorized the emergency use of Soberana 02 and Soberana Plus, turning them into vaccines.

From that moment on, Cuba has –along with the Abdala formula- three vaccines of national production against Covid-19.