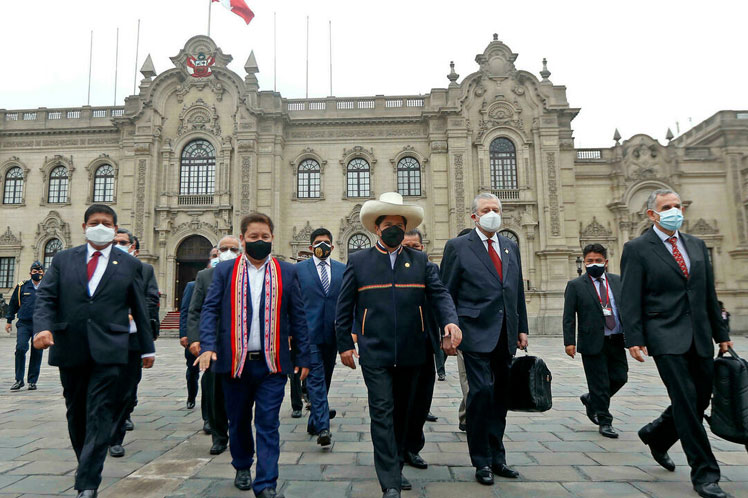 The result was recorded a few days after politicians and analysts took the fall of the cabinet for granted, in the face of pressure from the far-right bloc that conditioned their vote for confidence on the withdrawal of the prime minister, Guido Bellido, and five ministers and that finally was almost isolated.

A vast majority of legislators, in a quick vote, approved Bellido’s statement, who invoked national unity in the face of the economic and health crisis and called on the Legislature to abandon extreme positions and work alongside the Executive despite the differences.

On the second day of discussions on the government request, Bellido pointed out that the government of President Pedro Castillo was elected based on a program that proposes ending in democracy and peace with the current political and social system and deepened by the neoliberal constitution of 1993.

After the session, Bellido thanked the legislators of the ruling Peru Libre, his ally Together for Peru, and those of the center and center-right Popular Action, Alianza para el Progreso, Podemos and Somos Perú for the support in the vote.

He added that the government will collect the criticisms and suggestions of these groups and also those raised by far-right congressmen who did not vote for trust.

The victory was celebrated with jubilation by protesters from the Peru Libre party gathered in front of Parliament, where elements related to the right-wing bloc were also present and clashes between both sides were recorded.

On the other hand, the Renovación Nacional (RN) and Avanza País parties announced that they will carry out the threat of questioning and censuring (dismissing) the ministers whose replacement they claimed as a condition to vote for confidence in the cabinet.

RN spokesman Jorge Montoya specified that next week his bench will present the request for censorship to the Minister of Labor, Íber Maraví, and later to others.

The Montoya bench and related media accuse of being linked to terrorism, for old and unproven police suspicions that 40 years ago he participated in attacks by the Shining Path armed group, and for receiving elements supposedly related to that almost extinct organization.