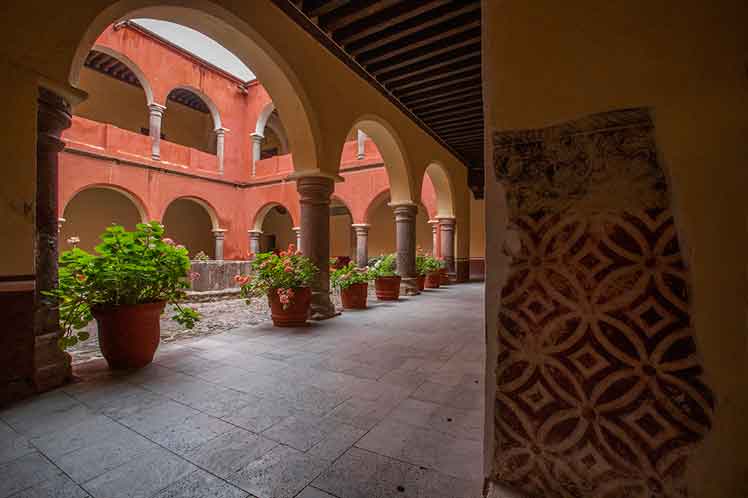 Mexico, Aug 29 (Prensa Latina) The Convent of Our Lady of the Assumption of Tlaxcala, which adorns the slopes of the Popocatepetl volcano is finally registered among the first 14 monasteries of the sixteenth century in Mexico, has been recognized by Unesco as a World Heritage Site.
Share on facebook
Share on twitter
Share on whatsapp
Share on telegram
Share on email

Cuerpo : It has unique ornaments that make it an exclusive jewel, thanks to the architects of the time between 1525 and 1527, estimated dates of the beginning of its long and complex construction.

It is a Franciscan monastery and cathedral located in Tlaxcala, the smallest state in the country, and which has been on the list of candidates of the United Nations since 1994.

Founded in 1537 after more than 10 years of work, the cathedral Nuestra Señora de la Asunción is considered one of the oldest and most beautiful buildings of the XVI century and is composed by access, tower, high atrium, cloister, temple, posa chapel and open chapel with low atrium.

It has the importance of having been the first regional version of this architectural model, which served as a spiritual, political and aesthetic rehearsal to begin the evangelizing expansion of the Spanish colonialists towards the center and southeast of Mexico.

The façade of the Conjunto Conventual is austere, characteristic of this religious order and its convent-fortresses of the European Middle Ages.

Its access consists of a semicircular arch supported by pilasters and an alfiz framed by a Franciscan cordon. On this one, two pairs of baquetones are observed and a top in the way of a tile cover of red color and two gargoyles to its ends.

The chapel is located to the left side of the temple, whose entrance is framed by a semicircular arch. In the superior part it exhibits representations of Christ and the Virgin Mary.

The roof, something unusual in this nation, is of two waters and lacks domes; it consists of a single shed and its only tower is separated from the church. The interior part of it is a coffered ceiling of cedar wood, Mudejar style, characterized as the most important in the country, with an incalculable artistic value. Its dome is octagonal, with a drum and decorated pendentives.

The main altar of baroque style dates from the XVII century and shows Solomonic columns, sculptures and paintings, among them an oil painting that represents the baptism of a Tlaxcaltec nobleman, with Hernán Cortés and the Náhuatl Malinche as godparents.

The baptismal font is located in the recently restored Rosario Chapel or of the Third Order, which houses in its central niche the effigy of Saint Francis.