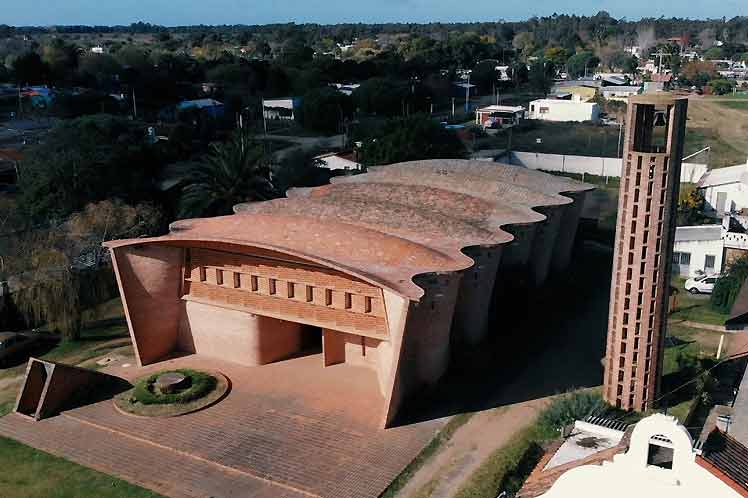 The creator of the Cristo Obrero temple, Uruguayan engineer and architect Eladio Dieste (1917-1920), saw his daring project materialize between 1958 and 1960 in the town of Estacion Atlantida, in the territorial department of Canelones, in the south of the country.

Praised by specialists with astonishment for the rupture it represented with respect to traditional religious constructions, Dieste used to say that ‘the church of Atlantida was my architecture school’.

In the Unesco report, it was emphasized that this work constitutes the greatest expression of the technique of ‘reinforced ceramics’ of the painter and university professor, which is based on the intelligent use and exploitation of brick and few steel.

According to his proven thesis, these are structures capable of resisting the stress exerted on them thanks to their shape and not to their mass, which entails a lower requirement of materials.

Dieste polished his technique and style, achieving not only innovations in construction, but also a widely recognized aesthetic display.

At the same time, buildings of this type were widely accepted because they allow for greater lightness, prefabrication and systematization in the repetition of their components, with competitive costs for the market.

Government authorities celebrated the official inscription of the temple on the World Heritage List at a mass held at the site, at which time the Undersecretary of Education and Culture, Ana Ribeiro, said that ‘now there will be a magnifying glass on everything that bears the name Dieste and it will be valued by having greater visibility’.

In this way, the site joins the two that already held that category in the country, the Historic District of Colonia de Sacramento, declared as such in 1985 and the facilities of the former Anglo meat packing plant in Fray Bentos, in 2015.

The UN agency also certified the tango as Intangible Cultural Heritage in Uruguay, shared with Argentina as a genuine expression and the candombe, which vindicates the contributing component of African origin to the formative process of the nation.