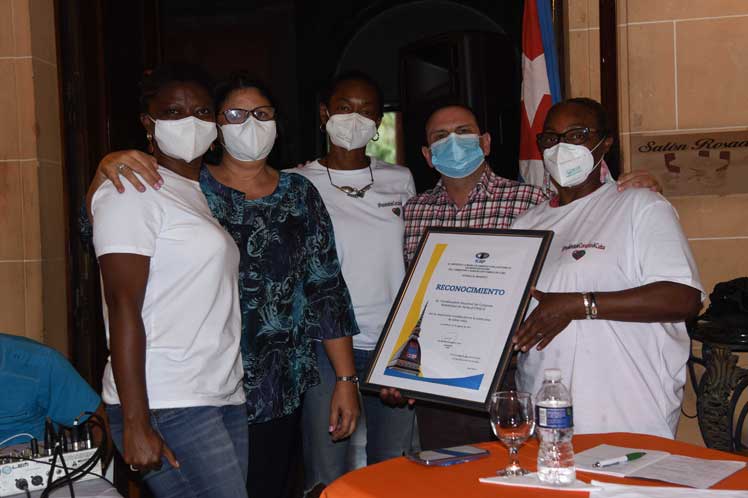 ‘The homeland needs us now and Cubans around the world want to help,’ the activist told Prensa Latina after accompanying a 200-cubic-meter shipment coming from Italy to this capital to support the fight against Covid-19.

The also president of the Coordinating Committee of Cuban Residents in that country arrived with the Cuban flag on her pendants, bracelet and clothes, as a reminder of her pro-independence roots, in particular, of her father, a guerrilla fighter in the struggle against the dictatorship of Fulgencio Batista (1952-1958).

‘We have a history in defense of the country’s sovereignty, a history that I cannot betray: the Galano generals fought with Jose Maceo; my father left this world with a flag on his coffin and my mother, at the age of nine, collected supplies for the rebels,’ she said.

For Galano, the relationship with her country is essential, which explains the stories of the ‘juggling’ to take shipments of Cuban residents in France by road to Italian territory or the support also from Spain.

‘Despite the fact that there are many people asking for invasions, others love their homeland, their family, their friends. And they have put their hearts into Cuba,’ she reaffirmed.

At the same time, Cuba arouses admiration and prestige abroad, she acknowledged, mentioning her surprise when an Italian man contacted her to donate 67,000 pre-packaged syringes.

Among other supplies, the total contribution included pulmonary respirators, generic medicines for morbidities and associated symptoms, antibiotics, sanitary materials and rapid tests for detection of the SARS-CoV-2 coronavirus.

The cargo arrived on August 27 to contribute to the fight against the pandemic on the island, particularly for scientific and hospital institutions.