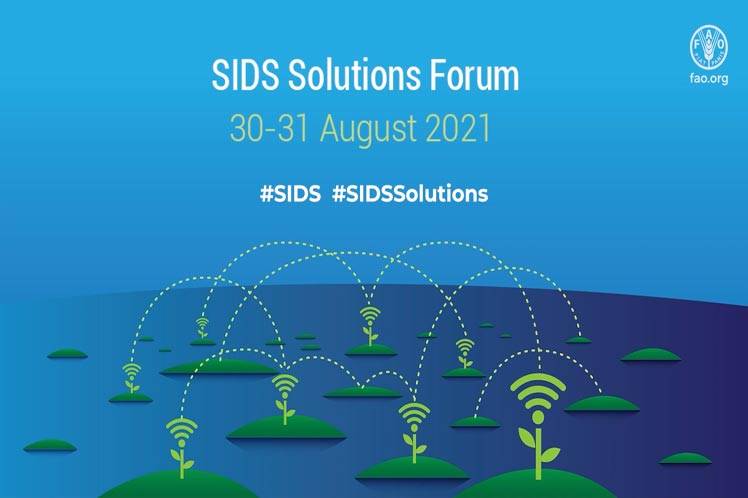 Rome, Aug 30 (Prensa Latina) The Director-General of the UN Food and Agriculture Organization (FAO) QU Dongyu on Monday called on Small Island Developing States (SIDS) to foster the power of innovation and digitalization to speed up the achievement of the Sustainable Development Goals (SDGs).

At the opening session of the two-day virtual SIDS Solutions Forum (30-31 August), co-hosted by FAO and the Government of Fiji, Qu highlighted FAO’s commitment to build a world free from hunger and malnutrition.

QU said in an address to the opening session that today´s meeting is ‘an example of how innovation and digitalization bring opportunities in the face of challenges.’

Heads of State and Government from nine Pacific Island countries attended or were represented at the high-level event, as well as government ministers holding key portfolios related to agriculture, food, nutrition, environment, health, and information and communications technology. African and Caribbean nations were also represented.

At the high-level event, aimed in a particular way at promoting the end of poverty, zero hunger and reduction of inequalities, the Platform of solutions for SIDS was launched, allowing to exchange responses and innovations both locally and generated from similar situations in other places.

Qu highlighted, in this regard, the need for science, technology and innovation for the transformation to more efficient, inclusive, resilient and sustainable agri-food systems.

Even before COVID-19 battered their economies, Pacific SIDS were already dealing with other challenges such as frequent natural disasters, the effects of climate change, limited arable land, dependence on small-scale agriculture, high-priced imports, and a high prevalence of non-communicable diseases, such as heart disease and Type 2 Diabetes. All of these issues have hampered their progress toward achieving the 2030 SDG targets.

SIDS in the Pacific have been hit especially hard because of their reliance on tourism, with the closure of borders resulting in the loss of crucial revenue.