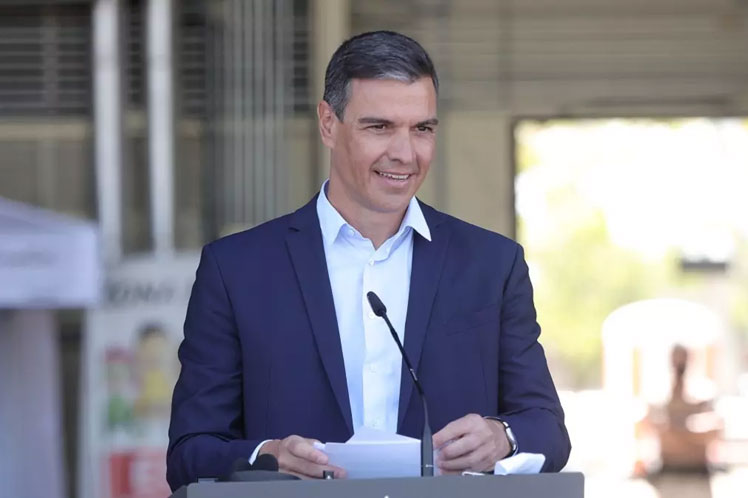 At the end of August, Spain registered 70.3 percent of people with two doses and achieved a notable decrease in infections by SARS-CoV-2 virus causing the pandemic.

Regarding the fulfillment of the government’s objectives, Sánchez came this Thursday to Guadalajara, Castilla La Mancha, at facilities of the Centralized Vaccination Service, where the campaign began.

In the city located about 52 kilometers from Madrid, the chief executive celebrated, together with representatives of the health sector, patients and members of the public administration the exploit of 70% of the population vaccinated with full dose.

‘The success of vaccination is a lesson of our best patriotism, committed and supportive’, Sánchez said. He was accompanied by Minister of Health, Carolina Darias.

In the presence of the first vaccinated woman in Spain, Araceli Hidalgo, a resident of Los Olmos care center for the elderly, and nurse Carmen Carboné, who injected the first dose to Hidalgo, the president recognized the role of professionals of the vaccination system, as well as that of the citizenship.

Araceli Hidalgo is a 97-year-old woman who has called on people of all generations in Spain to trust the drug to fight the disease.

Administering 66 million doses against Covid-19 in eight months, while the last flu vaccination campaign was considered a success with 14 million in eight weeks, shows how difficult this task has been, Sánchez reflected.

This gives way to the youngest who are getting the vaccine doses these days, whose patience and responsibility during the months awaiting he commented.

In total, to date, 66,130,220 doses have been inoculated in our country, with which more than 36.5 million people, that is 77% of the population have at least one dose; and more than 33.3 millions have the complete scheme, he said.

Yesterday, Minister Darias emphasized that ‘we have achieved a flying goal, but there is still a lot of work to be done. This week more than three million vaccines will arrive in Spain, basically from Moderna and Pfizer, a great support for our projections’.