Support for Cuba at festival of French newspaper L’Humanité 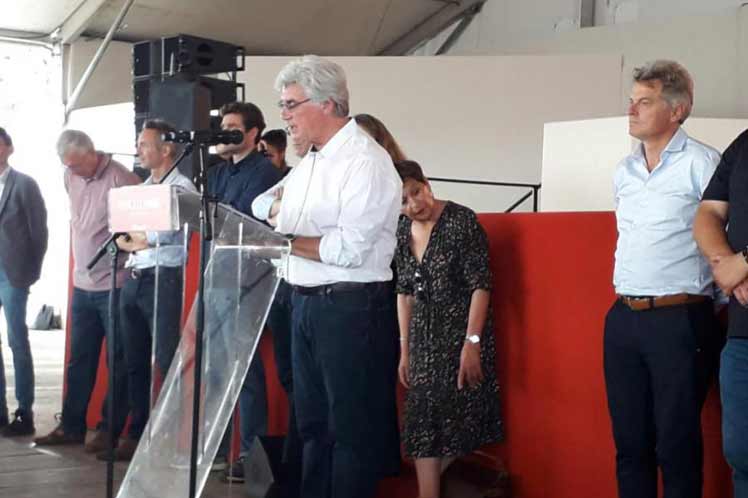 Support for Cuba at festival of French newspaper L’Humanité

On September 11 and 12, Cuba was present in the programs of the main event held annually by the Communist Party of France (CPF) and its newspaper. The diplomat met with executive officials of the organization, parliamentarians, trade unionists and friends of the solidarity associations with Cuba.

In statements to Prensa Latina, Rodriguez highlighted the high attendance at the debates on Cuba, and the recognition that speakers and participants showed about Cuba’s medical breakthroughs, both in the field of vaccines and in relation to the ‘Henry Reeve’ Medical Brigades, present in 50 countries around the world.

All these breakthroughs have been achieved in the context of the aggressive blockade by the United States, kept by (President Joe) Biden, with a very strong impact on Cuba, and worsened by the Covid-19 pandemic, Rodriguez added.

That denunciation was present at the debate ‘Imperialism: attempt to destabilize in times of Covid-19′, and at the international panel ’60 years of blockade: What is Cuba’s secret to withstand against the United States?’, which clearly set out a struggle that, according to the ambassador, ‘is not only taking place in Cuba, but in all countries that are friends of Cuba.’

There are excellent relations with the CPF, the diplomat said, ‘and I have the feeling that this year Cuba was the country most present at the Festival of L’Humanité, both in the stalls with flags or images of Che and in the program of events and debates,’ he added.

According to Rodríguez, the meetings with the president of the France-Cuba Friendship Group in the French National Assembly, Francois-Michel Lambert; with CPF National Secretary Fabien Roussell; or with L´Humanité Director Patrick Le Hyaric, among others, will allow deepening academic and cultural ties starting next fall.

Starting on November 15, when restrictions to travel to Cuba due to the Covid-19 pandemic will be made more flexible, several delegations of French parliamentarians and solidarity groups are expected to travel to the Caribbean island.