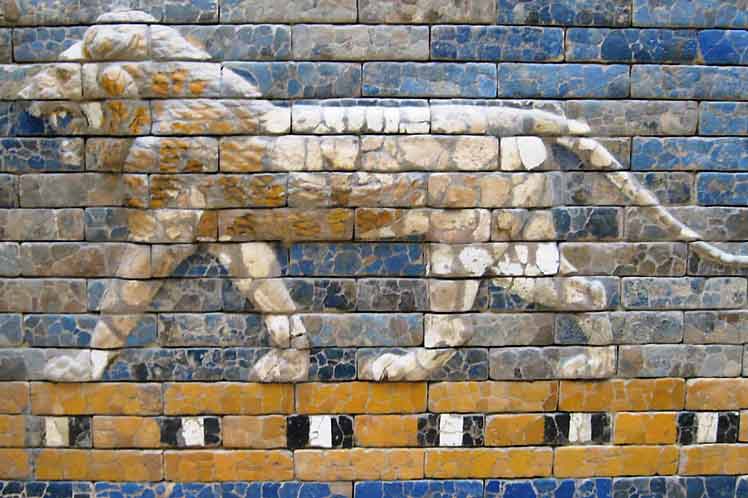 It has been confirmed and documented by findings made in different sites of the Assyrian culture, from simple homes to the flashy friezes of the Babylon walls.

At that time they were earthenware tiles, painted outside and later varnished, to which, throughout time, tile makers included other materials and developed clay-baking techniques until they got to enameling.

This ceramic technique entered Europe in the 7th century through the Iberian Peninsula, mastered by the Muslims, and gained momentum still exemplified in the architecture of the Califato de Córdoba, which has drawn the attention of researchers, artists and tourists.

Tiles were brought to the New World by the Spanish ‘conquistadores’ and their use expanded as colonization took root in the continent which they named América. Tiles were used in magnificent palaces, mansions and Catholic churches, which amplified their oppressive power over beaten native peoples.

This beautiful component can currently be seen in inner sections of emblematic buildings in the capital of Uruguay, including the Legislative Palace, in some centenarian constructions and even in contemporary ones with eclectic designs.

Uruguayan architect Alejandro Artucio Urioste wrote books, such as El azulejo en la arquitectura del Río de la Plata, siglos XVIII y XIX (The tile in the architecture of La Plata River, 18th and 19th centuries) and El azulejo en la arquitectura uruguaya, siglos XVIII, XIX y XX (The tile in Uruguayan architecture in the 18th, 19th and 20th centuries), in which he referred to mass industrialization. The latter was presented in the context of the declaration of Montevideo as Iberian-American Culture Capital in 2013.

Such was its passionate journey, which includes a collection made up of more than 5,000 pieces, declared a National Monument in 2014, which can be seen and enjoyed at the Tile Museum in Montevideo, located at a building that mixes art deco style and rationalistic architecture, designed by Leopoldo Carlos Artucio in 1931.

Pieces from colonial times up to the mid-20th century can be found in the collection. Worthwhile mentioning is that they were imported from different countries, such as Argentina, the Netherlands, Mexico, France, Portugal and Brazil, which results in a wide variety of styles, techniques and formats, including more than one thousand19th century French stanniferous tiles, all of them full of artistic style.

Failure of plans to destabilize Cuba discerned in Uruguay