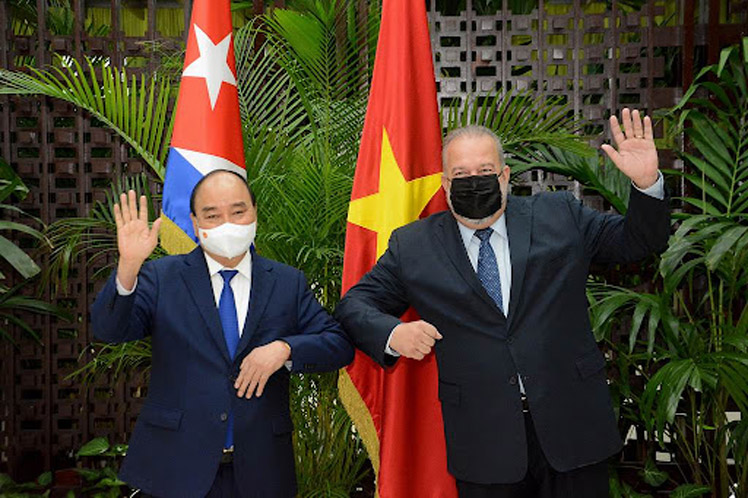 In particular, they agreed to make joint efforts to fight the Covid-19 pandemic, as an expression of the solidarity that has traditionally accompanied the bonds of collaboration and friendship between the two nations, according to a local television report.

Vietnam authorized the emergency use of the Cuban vaccine Abdala. On Saturday in Havana, executives of the Cuban Center for Genetic Engineering, producer of the immunizing agent, and Vietnam’s Center for Research and Production of Vaccines and Medical Biological Products signed a biotechnological cooperation agreement.

Marrero praised the progress made by Vietnam in the implementation of the economic renewal process, known in Vietnamese as Doi Moi, and stressed that it is consolidating as Cuba’s second largest trading partner and first investor of the Asia-Oceania region in the island.

Meanwhile, Nguyen Xuan Phuc thanked Cuba for its collaboration in the fight against Covid-19, through technical scientific exchange and the shipment of interferon, and congratulated the Caribbean country for the development achieved in the health and biotechnology sectors.

He also expressed his satisfaction with the good state of economic cooperation projects and Vietnamese investments in the island, and noted the potential for expanding bilateral collaboration in all areas.

Prior to this meeting, the Vietnamese leader met the Speaker of the Cuban Parliament, Esteban Lazo.