The strange case of the Egyptian Black desert 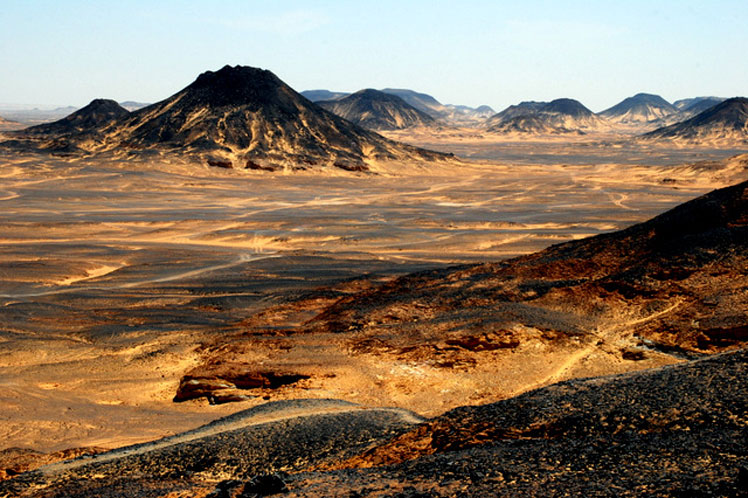 The strange case of the Egyptian Black desert

However, traveling to the Egyptian Black desert totally changes such a repeated image and takes us to an incredible landscape where dark shades prevail in a game of visual contrasts.

The Perseverance Probe caught something similar when landing in Mars: an extensive region with unusual hills and molds scattered over sandy plains like archipelagos in the Ocean, only that this time red is not the prevailing color, but orange, brown and, for the visitor’s surprise, black.

It’s one of the natural parks that make up the Saharan area in Egypt, to which people can access through a four-to-five hour trip from Cairo and which, despite being far away and isolated, is the threshold of the so much desired journeys to other worlds and a feast to geology lovers.

Located between the Bahariya Oasis and the Farafra fall, some 400 kilometers southwest of the capital, the strange site includes hills, table mountains and rocky structures which the constant wind erosion covers with a dark layer of dolerite –also called black granite- and iron quartzite, giving them that mysterious and fascinating look that can only be found in volcanoes. Precisely in this eruptive event and later cycles of changes in the Earth cortex we can find the explanation of such a strange case, which is not foreign to the evolution of Mars itself and other planets of the Solar System.

According to experts, some 180 million years ago –in the early Jurassic- the region was under the sea, but the intense volcanic activity which affected the entire planet changed its geology, raising ocean land, from where peaks,summits and mounts gradually emerged, resulting in the formation of basaltic rocks.

During that process, what was later known as the Al Marsous Mountain emerged, a magnificent crater covered by volcanic veined marble, whose layers fill wrinkles marked by time in its old rocks.

At that time the English Mountain, the highest summit in the Black desert, equally emerged, offering a show perhaps more impressive than that watched from the plain and enables the traveller to take pictures not only of the alien scene, but also of the White desert, another important national park that stretches south of the Farafra Oasis.

As a curious detail, these rough sites treasure fossils of trees and forests, trustworthy witnesses to more green times and times as glorious as that of the Egyptian Pyramids, but which, rather than being a human work, are part of the steady chancing flow of nature.

According to the Scientific American magazine, two decades ago U.S. paleontologists who worked on the desert borders found remains of the Paralititanstromeri dinosaur, one of the largest dinosaurs found until now, which apparently lived in the Cretaceous period nearly 90 million years ago.

In 2010, the Egyptian Black desert was declared a natural reserve, an action aimed at protecting its scarce but interesting biodiversity, as well as preserving the site’s unique rocky structures.

Example of Fidel Castro for Latin America highlighted in Egypt

Example of Fidel Castro for Latin America highlighted in Egypt