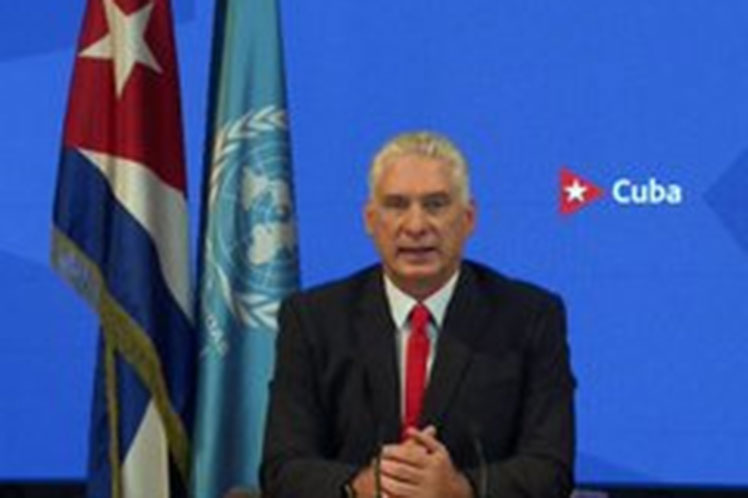 Speaking through video-conference at the 76th session of the United Nations General Assembly (UNGA), the President said that the island will tirelessly fight for greater justice, prosperity and development of the peoples of the planet, who deserve a better world.

He also stressed that the Caribbean nation will not cease to clearly expose its truths, ‘no matter how much some may be upset’, and to defend the principles and values in which they believe.

The Cuban head of state ratified the aspiration of being part of an economically and socially integrated Latin American and Caribbean region, capable of defending the commitment to the Zone of Peace proclamation, ‘in the face of the pretensions of reimposing the Monroe Doctrine and neocolonial domination’.

In this sense, he emphasized that Cuba opposes attempts to destabilize and subvert the constitutional order and the civil-military union in the Bolivarian Republic of Venezuela, while reiterating its solidarity with that people.

He also reaffirmed his support for Nicaragua’s Government and people, who ‘are courageously and dignifiedly defending their achievements in the face of threats and interference’ by the United States.

The Diaz-Canel supported the demand of the Caribbean countries for reparations for the horrors of slavery, as well as their right to fair and differentiated treatment, indispensable to face climate change, natural disasters, the international financial system and Covid-19. He defended the right of Puerto Rico to be free and independent, after more than a century under colonial domination; and expressed solidarity with the Saharawi people and with Argentina’s position regarding sovereignty over the Malvinas, South Georgia and South Sandwich Islands.

Diaz-Canel ratified the commitment to peace in Colombia, demanded the cessation of external interference in Syria and full respect for its sovereignty and territorial integrity; and condemned the unilateral coercive measures imposed on Iran.

He pointed out the need for a fair, broad, comprehensive and lasting solution to the conflict in the Middle East, which includes the end of the Israeli occupation of the usurped Palestinian territories and the exercise of the right of the Palestinian people to build their own State within the pre-1967 borders.

He rejected the unilateral sanctions against the Democratic People’s Republic of Korea and Russia, and the intention to extend the presence of the North Atlantic Organization to the borders of that country.

He expressed support for the ‘One China’ principle and opposition to interference in the internal affairs of the Asian nation and Belarus.

The Cuban President said that the UNGA cannot forget the lesson of Afghanistan, where thousands of people died and millions were displaced; something that is not an isolated case, because ‘where the United States intervenes, instability, deaths, chaos and suffering increase and lasting scars are left’.